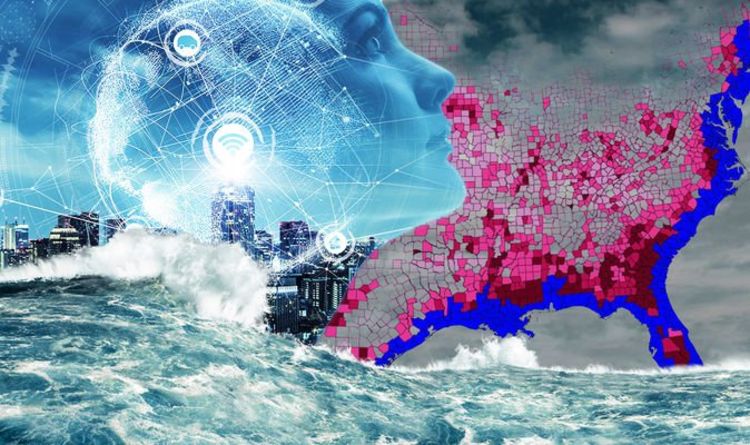 Mass migrations on an unprecedented scale will soon be a common occurrence in the US due to man-made climate, an AI study has forecast. The rising sea level study is the first to use artificial intelligence to project migration patterns resulting from global warming.

University of Southern California (USC) scientists discovered the impact of rising oceans will ripple across the US, with residents racing inland away from flooded coastal areas.

In the US alone, 13 million people could be forced to relocate due to rising sea levels by 2100.

US cities throughout the country will consequently have to grapple with incredibly inflated populations.

Effects could include more competition for jobs, increased housing prices and more pressure on infrastructure networks.

AI has calculated the most popular relocation choices will include land-locked locations such as Atlanta, Houston, Dallas, Denver and Las Vegas.

The artificial intelligence-led study also forecasts suburban and rural areas in the Midwest will experience disproportionately large influx of people relative to their smaller local populations.

Sea-level rise is caused primarily by two factors related to global warming: added water from melting ice sheets and glaciers and the expansion of sea water as it warms.

In only a few years, scientists predict hundreds of thousands of homes on the US coast will be flooded.

It is feared that by the end of the century, the ocean surrounding the USD coast will rise 6ft (1.8m) – rapidly redrawing southern Florida, parts of North Carolina, Virginia and most of Boston and New Orleans.

To predict the trajectory of sea-level rise migration, the researchers took existing projections of rising sea levels and combined this with population projections.

Based on migration patterns after Hurricane Katrina and Hurricane Rita, the team trained machine learning, a subset of artificial intelligence, to predict where people would relocate.

Dr Caleb Robinson, a visiting doctoral researcher from Georgia Tech, added: “We talk about rising sea levels, but the effects go much further than those directly affected on the coasts.