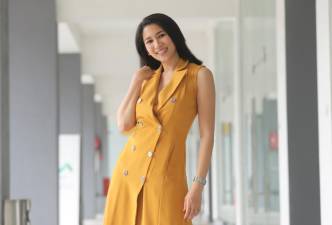 Consunji became the first Filipina to win best new performer for her role in the film Still Human, giving her acceptance speech in Cantonese, English, and Tagalog. She was also nominated for best actress at the event, but lost out to Chloe Mayaan.

The emotional film, which showcases Hong Kong through the eyes of an immigrant, won the hearts of both audiences and critics.

It was also the first film role for Consunji, a stage actress, and she did a brilliant job.

The 35-year old actress – who has made Hong Kong her home for the last 12 years – is utterly grateful for the opportunity to act in a Hong Kong film despite Cantonese not being her first language, and also for the awards she has received.

But there have been some disadvantages to her success. For starters, some filmmakers were more interested in casting her as a domestic helper again, and the last thing she wants to do is to repeat herself.

She is carefully choosing scripts where she gets to spread her wings and play a wide range of roles.

Speaking to theSun when she was in Kuala Lumpur last week, Consunji says: “If you really believe that we live in a [culturally diverse world], you should see me in different roles and as different characters.

She considers herself extremely lucky that there are several Hong Kong directors who have approached her with projects where they want her to break the stereotype that a Filipina actress can only play domestic helper roles in Hong Kong films.

However, she is not keen on revealing her future projects just yet. “Call me six months down the road and I will have a different story to tell,” she says.

Her ultimate dream role is to play a villain.

She believes there must be a reason for someone to behave in a certain way, especially when their actions are considered evil, and it will be a great challenge for any actor to bring these elements to the audience.

She also expressed a keen interest to be active in the Filipino film industry.

“There is a new wave of Filipino directors who are breaking stereotypes and now, it is a great time to be an actress in the Philippines,” she says.

Consunji was born and raised in Manila as the eldest of two children. Her father was a pilot, while her mother was in the financial industry before becoming a full time housewife.

She says: “My parents have always encouraged my interest in the arts. But they have also told me that [it] will not put food on the table.

“They saw my interest in the arts as a productive hobby.”

At age 10, she joined a professional theatre company called Repertory Philippines in Manila, where she was groomed to be a performer.

She admits the training was rigorous and exhausting, and she received harsh criticism from her directors.

“I wish there was some positivity in their comments,” says the actress, who received a BA and an MA in Political Science. “It can rob you of your self confidence.”

At the same time, she is extremely grateful for the training she got. It has made her strong and tough enough to face any situation.

In 2008, she moved to Hong Kong to work at Hong Kong Disneyland, where she performed as the lead vocalist in musical productions such as High School Musical and The Golden Mickeys.

She says : “I was only supposed to stay in Hong Kong for eight months.”

She eventually fell in love with Hong Kong, and ended up staying for 12 years.

Five years ago, she and her husband Carsten Rakutt founded Baumhaus, a creative art space for children ranging from toddlers to six years old.

“It is so hard to work with your spouse,” she says

“It can test your relationship. If you can scream at each other in the board room and have a peaceful dinner together in your home on the same day, that means you have a good relationship.”

Coming back to the film, Still Human, one wonders what was her experience working with respected Hong Kong film legend Wong, who plays her employer?

She says: “Seasoned actors are always professional, and I knew I was going to learn a lot from working with him.”

She was proven right and she was impressed that the humble actor treated everyone with the greatest respect.

She says: “It was my first time acting for the screen. I was making a lot of mistakes. He was patient with me.

“It was a joy to work with someone who is not just talented, but also responsible and kind.”