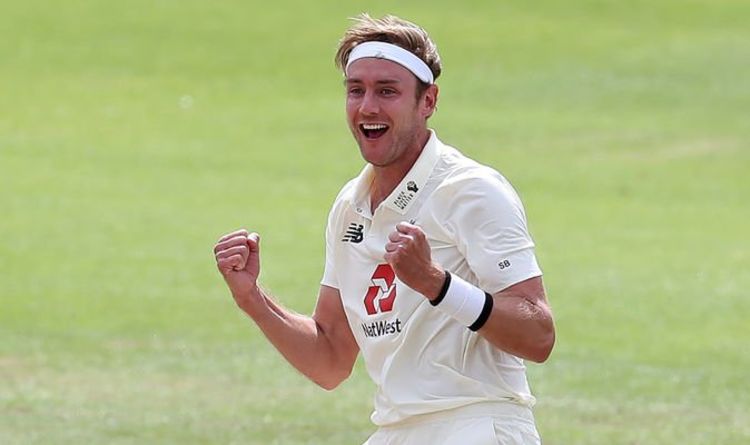 Quitting white ball cricket has been key to Stuart Broad joining Jimmy Anderson as one of the game’s greats according to Eoin Morgan. Broad joined Anderson and only two other quicks – Courtney Walsh and Glenn McGrath – in the exclusive 500 Test wicket club on Tuesday.

And Morgan, who labelled the pair as “the greatest there has ever been” believes that without calling time on limited overs cricket Broad might not have got there.

Anderson played his last one day international in March 2015 and Broad bowed out 11 months later in February 2016.

Saluting the latter’s momentous milestone, Morgan said: “Those guys know their bodies, and how they feel, but I know for me it has definitely prolonged my career, having cut red-ball cricket out.

“Things are less clustered and cricket is not as overwhelming as it potentially could be towards the end of your career.

“But to show the longevity and the skill Broady has shown is incredible but not only that he’s box office.

“He takes wickets in clusters which means he’s a nightmare to play against. It is incredible what he has achieved.”

He added: “Broady and Jimmy are always paired together but when you speak about them on their own they are the greatest that has ever been.”

Morgan also told his white ball stand-ins that they are not in to keep seats warm for absent World Cup winners, insisting they can still have a big future with England.

The World Cup-winning skipper defended the selection of 34-year-old veteran batsman Joe Denly as well as players like James Vince and David Willey, who may have thought their time had gone.

And while he admitted younger talent had missed out on their account, he has assured his golden oldies they can show they still have a part to play in future World Cups.

Willey and Denly were ditched from last summer’s World Cup squad on the eve of the tournament while James Vince stood in for the injured Jason Roy in three group games.

However all three remain part of future planning and Morgan has urged them to grab their chance to shine against Ireland, starting at the Ageas Bowl.

“I think a lot of the perception is that they’ve almost had their chance and their time has gone, whereas we see it as going into the next World Cup we need experienced guys making good decisions under pressure,” said Morgan.

“That’s exactly what we’re after, and experience lends itself to that. We’ll continue to give opportunities (to others) but it’s those guys we feel might have an impact in selection on the next two T20 World Cups or the next 50-over World Cup.”

A three-match series against Ireland might have been the perfect platform to see how exciting Sussex opener Phil Salt handled the step up from the Lions.

Certainly his unbeaten 100 against Ireland in the series warm-up on Sunday increased the clamour for him to be given a go ahead of Denly who will be 37 by the time the World Cup defence comes round in 2023.

Yet Morgan and the selectors remain fans of the popular veteran, who was admittedly England’s best bat in the most recent ODI series in South Africa in early February.

“Joe played really well in South Africa. It was a long time ago but he’s still a high-quality player and creating opportunities for him is important to us,” he said.

“With Joe age is not something we talk about – he’s fit and agile as anybody. It’s just his desire and hunger to play and succeed. I think the opportunities that him and James Vince get will determine how they long they might go or what direction we go in.

“But selection was particularly difficult. We’ve always had tough decisions to make and I think everybody who was left out was a tough call.”

Ireland captain Andy Balbirnie is under no illusions as to the size of the task ahead in this series despite an England side missing Ben Stokes, Jos Buttler, Jofra Archer and Joe Root.

“There are people with points to prove in this England side and that makes them a dangerous animal,” he said.

“We have to make sure we do our thing as well as we can and stop them from showcasing how good they are.”

“There were really promising signs going forward. Having Sibbers at the other end to be that rock and have nothing faze him and...
Read more
Cricket

"He is a silly, silly lad," Vaughan told the BBC's Test Match Special. "I look at the West Indies, what they have given up to...
Read more