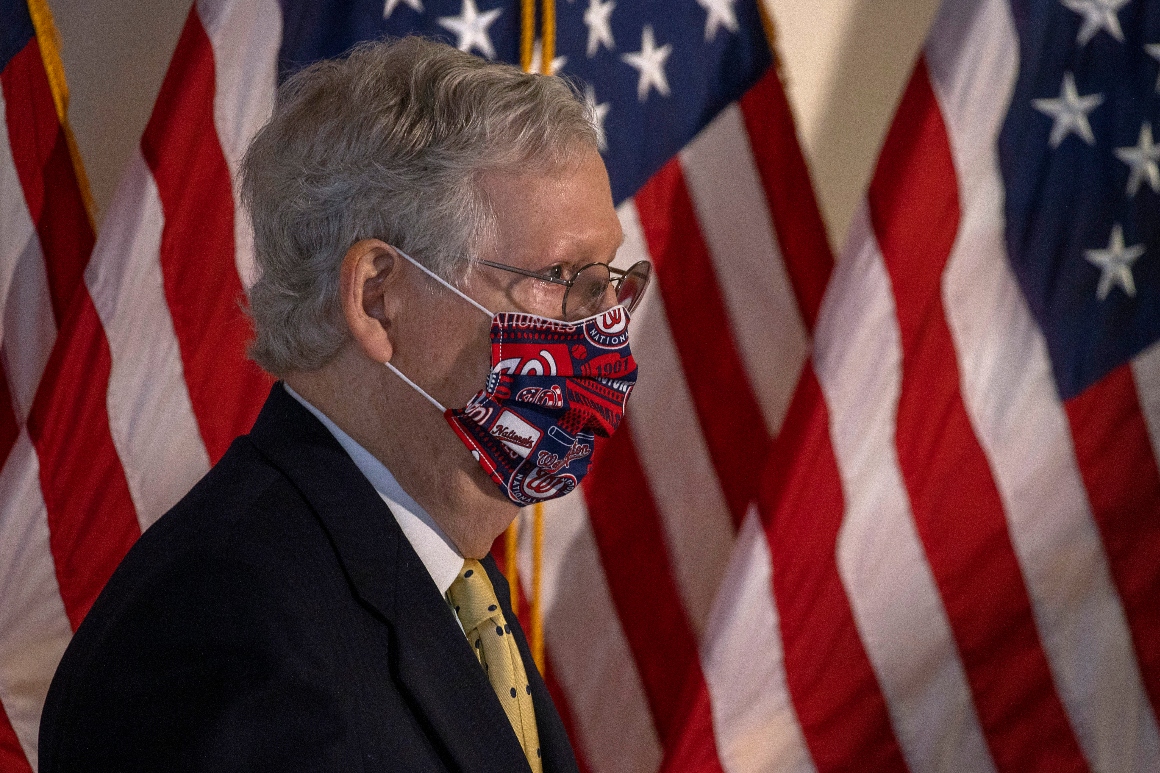 Senate Appropriations Chairman Richard Shelby (R-Ala.) said the bill includes $ 16 billion in new money for expanding state testing capacity — on top of $ 9 billion that hasn’t been spent yet — $ 26 billion for the development and distribution of vaccines, $ 105 billion to help schools reopen, $ 20 billion to assist farmers and ranchers and close to $ 30 billion to “bolster the U.S. defense industrial base.”

The Republican initiative includes close to $ 2 billion for the FBI to purchase personal protective equipment and boost the National Instant Criminal Background Check System, a White House priority. When McConnell was asked about the money at a news conference, he said: “Obviously we had to have an agreement with the administration in order to get started.”

Even before Republicans were find Schumer (D-N.Y.) was quick to pan the GOP proposal on the Senate floor.

“They can’t even put one bill together they are so divided,” Schumer said. “The greatest crisis America has faced in close to a century on health, 75 years on the economy, and our Republican colleagues can’t even agree among themselves about what to do and have put out a few piecemeal pieces that don’t even come close to doing the job.”

Negotiations on the next coronavirus relief proposal come as a $ 600 federal boost in unemployment benefits from the March CARES package began to expire over the weekend. Democrats are pushing to extend those benefits into next year.

The release of the Senate GOP plan comes after Mnuchin and Meadows spent the weekend negotiating with Senate leadership staff to hammer out the final details.

While the first three major coronavirus relief packages passed Congress with large bipartisan majorities — despite some intense partisan wrangling — this round of discussions is going to be much more challenging. Democrats want to spend at least $ 2 trillion more than Republicans will propose, while GOP hard-liners don’t want to do a package at all.

In a sign that negotiations are going to be difficult from the start, Meadows and Mnuchin spent Sunday floating a piecemeal approach to the aid package. But McConnell has vowed that any upcoming coronavirus relief bill will be the Senate’s last. Pelosi has also rejected the piece-by-piece idea — which some insiders are referring to as a “skinny” proposal — as a non-starter.

“It’s good that they called it skinny because that’s what you get when you don’t have enough to eat,” Pelosi said, decrying the lack of food stamp money in the GOP plan.

House Democrats were also quick to dismiss the idea of cutting federal unemployment benefits down to $ 200 per week.

“It is the ultimate disconnect with what Americans are dealing with if they think an extra $ 200 is enough for the families,” Rep. Dan Kildee (D-Mich.) said. “They don’t seem to understand that money is actually supporting that economy.”

Democrats say they aren’t ruling out a short-term extension entirely, if it could continue the extra $ 600 per week in benefits. But many are skeptical of the GOP’s efforts, citing the weeks of delay leading up to this point.

“My view is, we passed the Heroes Act 2½ months ago. It was a comprehensive and decisive response to a deadly pandemic. The administration and Mitch McConnell have done nothing ever since,” House Democratic Caucus Chair Hakeem Jeffries (D-N.Y.) said Monday.

“It’s time to act and act in a transformative way, and not with a short-term Band-Aid-like fix.”

The stakes for Congress to get another major package through before leaving for the August recess are high, as coronavirus cases continue to rise nationwide. Pelosi vowed Sunday that Congress would not leave town without a deal. Democrats are pushing for the $ 3 trillion Heroes Act, which the House passed in May, although McConnell has rejected that approach as far too costly.