Senate’s big week back: Nominations, with a side of coronavirus 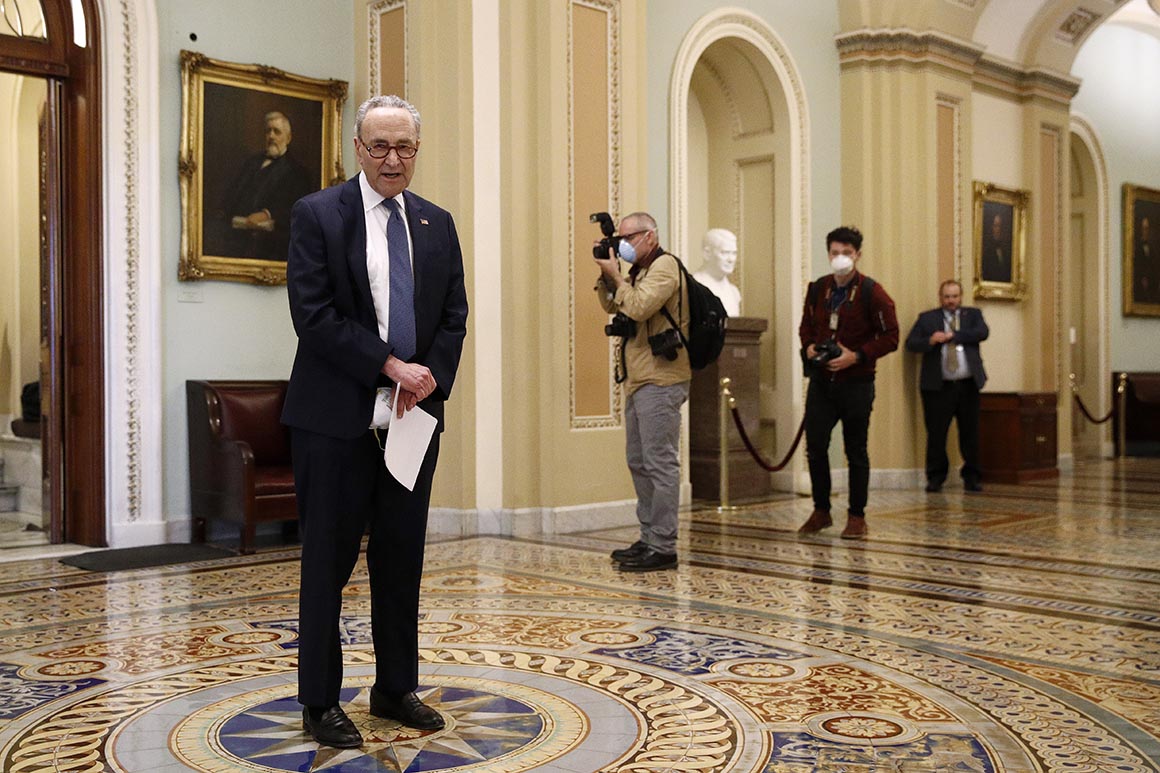 The Senate returned to Washington on Monday with a long to-do list as the coronavirus continues to ravage the country — but most of the action this week will not directly address the pandemic.

Rather, the Senate will focus on unfinished business from before it left for an extended recess in late March. And Republican leaders are eyeing a wide-ranging agenda— one that sets up a clash with Democrats who are calling for a narrow focus on Covid-19 as the death toll nears 70,000 and several states remain under lockdown orders.

“The Senate is back in session because we have important work to do for the nation,” Senate Majority Leader Mitch McConnell (R-Ky.) said Monday as the chamber gaveled in for the first time in five weeks.

Republican-led committees are scheduled to hold hearings for high-level presidential nominees including for the nation’s top intelligence post, while GOP leaders aim for votes later this month on key national security tools that remain dormant. But the Senate also plans to resume its record pace of confirming President Donald Trump’s judicial nominees, including a high-profile confirmation hearing this week.

Democrats are seething over the Senate’s noncoronavirus related priorities, as they continue to push for hundreds of billions of dollars in federal aid to state and local governments struggling to deal with the pandemic. They’re also pushing for rigorous oversight of the Trump administration’s handling of the crisis.

“It seems to me there is a lot of whining going on, but maybe that shouldn’t be a surprise,” Sen. John Cornyn (R-Texas) quipped when asked about Democrats’ protests.

But most Democrats said it was simply too early and unsafe for the Senate to be back.

“If we are going to be here … let the Senate at least conduct the nation’s business and focus like a laser on Covid-19,” Senate Minority Leader Chuck Schumer (D-N.Y.) said.

“It is amazing to me that McConnell brought us back, and not a thing about Covid is on the floor,” he later told reporters.

The return of the Senate’s in-person partisan squabbling comes amid fears that a potential outbreak in the Capitol could paralyze the institution, while Washington has yet to peak in coronavirus cases. The House remains out but could return by next week.

Schumer slammed GOP leaders for their plan to convene a Judiciary Committee hearing on Wednesday, where the panel will consider a McConnell protégé who was nominated to the second-most powerful court in the country. Schumer called that nominee, Justin Walker, a “manifestly unqualified, totally divisive right-wing judicial nominee.” The American Bar Association also rated Walker as “not qualified," citing insufficient legal experience.

“We’re surrounded by stay-at-home orders in D.C., Maryland and Virginia,” Durbin told reporters. “Why are we here? A hearing on Justin Walker on Wednesday? … Does this sound like a compelling national emergency that draws us in at risk. I don’t think it does.”

Despite Democrats’ long-simmering frustrations with McConnell’s push to confirm conservative judges to the federal bench, senators will have their work cut out for them when it comes to the pandemic. On Tuesday afternoon, the Banking Committee will hold a confirmation hearing for Brian Miller to be the special inspector general for pandemic recovery — a position created to provide oversight of a $ 500 billion fund to help businesses and industries struggling amid the crisis.

Still, Democrats are pushing for more oversight, including breaking the White House’s blockade on testimony from members of the coronavirus task force.

“Hopefully we’ll do some work and not just do confirmations — I mean, the oversight of the Covid package is horrible. We can’t get any information,” Sen. Jon Tester (D-Mont.) said.

McConnell has been pushing for the Senate to resume its normal business — which includes a hearing with Dr. Anthony Fauci, the government’s top infectious disease expert, on May 12 — with the Kentucky Republican positing that as long as front-line health care workers are on the job treating coronavirus patients, the Senate has an obligation to do its own work, too.

“I don’t think anybody could seriously argue that filling critical national security posts is not essential Senate business,” McConnell said. “On the floor and in committee, the Senate will be acting on key nominations that relate directly to the safety of the American people, oversight over our coronavirus legislation, and more.”

Most of that work must be done in person, GOP senators said.

“We’ve got nominations, we’ve got a meeting on the budget, we’ve got all the subcommittee chairs on the Appropriations Committee are meeting, and we’re probably going to start talking about what if any additional stimulus bills we’re gonna do,” Sen. John Kennedy (R-La.) said. “We’ll have plenty to do.”

GOP-led committees will begin their work on Tuesday morning, when the Senate Intelligence Committee will hold a confirmation hearing for Rep. John Ratcliffe (R-Texas), Trump’s nominee to be the director of national intelligence. Later in the week, the Armed Services Committee will consider several Pentagon nominees, and the Banking Committee could consider Federal Reserve nominees.

It’s also possible the Homeland Security Committee could schedule a vote on a subpoena for documents related to its corruption investigation into Hunter Biden, son of former Vice President Joe Biden. Chairman Ron Johnson (R-Wis.) has vowed to press on with the probe, which has taken on a new political significance in recent weeks as Biden became the presumptive Democratic presidential nominee.

On the legislative front, the Senate has yet to formally send the Iran War Powers resolution, which curtails Trump’s authority to attack without congressional approval, to the president’s desk. The Senate is expected to sign the resolution this week, and a veto override vote is anticipated in the next two weeks, according to a Democratic aide.

Three key provisions of the Foreign Intelligence Surveillance Act have also been offline since March 15 amid an impasse with the House. GOP sources indicated on Monday that the Senate will soon consider three amendments to a House-passed bipartisan extension of the surveillance powers, clearing the way for Trump’s signature.

Democrats are also eyeing another vote to override the president’s declaration of a national emergency to build a wall along the U.S.-Mexico border. Under the National Emergencies Act, Democrats can bring up the vote every six months.

Sen. Tom Udall (D-N.M.), who is leading the resolution to end Trump’s emergency declaration, said he plans to file it within the six-month window.

“The Senate should once again pass the bipartisan resolution to terminate the president’s national emergency,” Udall said. “This administration should be focused on the public health emergency tearing through the nation, not abusing the separation of powers and diverting defense funding for a political project at the border.”

A Senate Democratic aide said that while the vote could be as soon as May, it could also occur in June or July before the August recess. The current six-month window began Feb. 16 and will go through mid-August.

back, coronavirus, Nominations, Senate's, side, week