Setting a Record at the Retirement Community 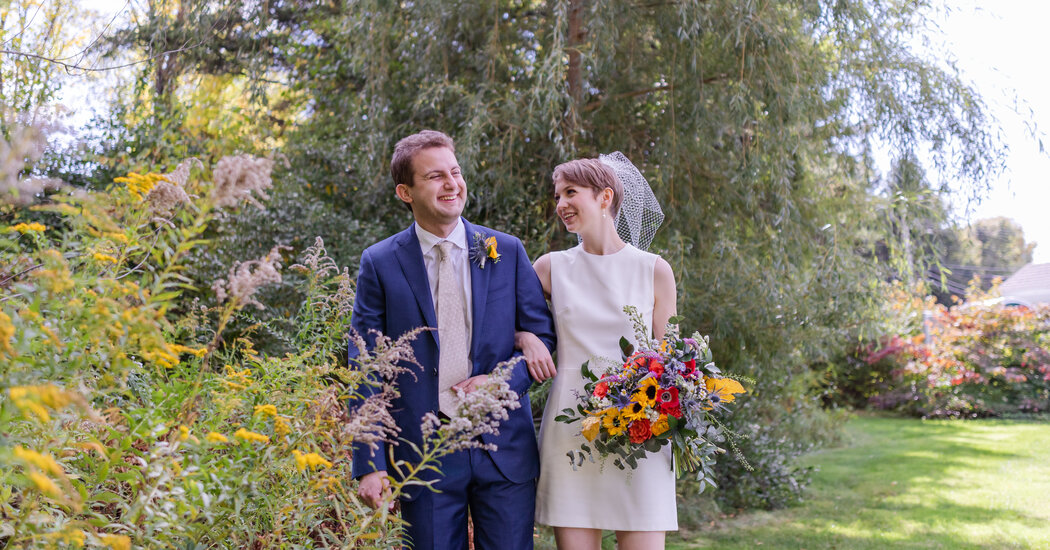 Mia Aplin Rollins and Samuel Sebastian Pihan, both 25, set a record on Oct. 3 as the youngest couple ever to get married at RiverWoods Exeter, a retirement community in Exeter, N.H. Fourteen years earlier, her maternal grandfather, Dick Aplin, now 91, had the first wedding there in October 2006, when he was 77.

“My mom had the idea,” said Ms. Rollins, who grew up in Nashville. She had planned a big Southern wedding in May with about 200 guests, at her family’s summer home in Monteagle, Tenn., before it was canceled because of the coronavirus.

“Seb was immediately so thrilled and excited about the idea and my grandfather ran with it,” she said. “My grandfather has barely seen anyone in the past months.”

Ms. Rollins, a video and audio installation sculptor, is pursuing an M.F.A. in sculpture at Rhode Island School of Design. In 2019, her work was part of “Seven Voyages,” a two-person show at Studio 66 Gallery in Nashville. Until 2019, she was also an art teacher for prekindergarten to fourth grade at the Episcopal School of Nashville.

Mr. Pihan, who goes by Seb, is a Coffin Family Law fellow in the family law victims rights unit at Pine Tree Legal Assistance, a legal aid group in Portland, Me. He received a law degree in May from N.Y.U.

Two days later when Mr. Pihan saw her in her dorm hallway, he invited her to breakfast at the Blue Room cafe on campus, where Ms. Rollins said they became “instant, dear friends.”

They talked about the graphic novel “Watchmen,” and Mr. Pihan impressed her with a quote from it: “All we ever see of the stars are their old photographs.”

On Jan. 28, Ms. Rollins’s birthday, he and two of her friends organized a surprised celebration in their dorm kitchen. Later she and Mr. Pihan spent the evening at Jackson Pollock Night at a literary fraternity they eventually joined, where students splattered paint on giant sheets of paper on walls. At another party there in March Ms. Rollins and Mr. Pihan, had their first kiss, as they danced.

“I looked at my grandfather and Peggy and I knew I wanted that with someone, and knew I could love Seb like that,” Ms. Rollins said. So they made their relationship work long distance after college, and currently while they live three hours apart.

“We’re continually falling in love with each other,” she said.

Mr. Pihan proposed Thanksgiving weekend 2018, also the weekend of his birthday, while they were visiting her family in Nashville, and his parents flew in from Weston, Mass.

“She’s been a reserve of strength for me,” he said. “I love her to tears.”

The Rev. David Grishaw-Jones, a United Church of Christ minister, led a nondenominational ceremony Oct. 3, before immediate family on the lawn of her grandfather’s retirement community in Exeter.

“The only thing that could have made it more perfect was if my grandparents Mary and David Rollins from Nashville could make it,” she said. “They’re hoping for grandbabies.”