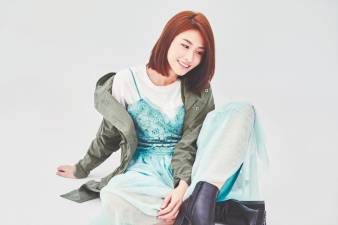 She may not know exactly when it was that she first wanted to be in showbiz, but Penang girl Ribbon Ooi said that her parents told her that she had been singing and performing ever since she was a young girl.

“When I was four years old, I had a 45-minute solo performance with a live band. So I guess, I’m one of a kind, maybe?”

Turns out a love for singing runs in the family. Her father was her first singing teacher. Her mother also loves singing, and her grandmother used to be an opera singer.

Many other musicians and entertainers have had to put their plans on hold due to the movement control restrictions, but not Ooi.

She has kept herself busy during this time by learning some new languages and polishing up on the languages that she already knows.

“And I do exercise everyday; I sweat a lot in my living room.

“I also did live streaming on social media to be closer to my fans, and I also practice my singing daily.”

She added: “I’m currently working on this TV series which is called The Ferryman. Although I’m not the lead actress this time, I’m glad that I’m able to work on such a big production.

“For the music part, I’m working on some new songs at the moment, but I will let everyone be in suspense for now.”

Despite the pandemic putting a damper on her plans, she still has been able to do more than her fair share to help those in need.

“I have a habit of going abroad to do volunteer work every year. Unfortunately, I could not do that this year because of the pandemic.”

Of course, that is not going to stop this big-hearted young woman from helping others.

“So on my birthday on Aug 29, I discussed with the record company about selling my album Give It To Me. I donated all the money I got from the album sales to a charity. Surprisingly, we managed to raise RM10,000 in just one week!

“I also handed all the donations to the Little Yellow Flower Education Foundation. I have to thank all my fans for their support and love.”

The purpose of this foundation is to help underprivileged children build a better life through proper education.

As for her plans for the future, Ooi said: “I hope I can be a multitalented artiste who can be very good at both acting and singing. I also hope that my films, and work on TV and music can leave a positive impact on society.”