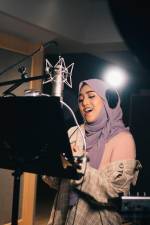 In conjunction with Merdeka and Malaysia Day celebrations, award-winning singer Shila Amzah is releasing her latest single “Kita” in both Malay and Mandarin versions on Aug 28 across radio stations nationwide.

The single “Kita” is the first collaboration between Shila and local songwriter and composer Monsterz as well as Malaysian renowned songwriter Amylea Azizan. “My initial idea was to write a song about friendship for Shila, but we thought it would be fun to produce the song in Malay version too,” said Monsterz.

Available in both Malay and Mandarin versions, the new single is also in time for Merdeka and Malaysia Day celebrations, where it reflects the pride of our nation in embracing multi-cultural diversity and people from different ethnicities living in harmony.

With her sentimental vocals, Shila expressed her fond memories of school life in this new heartfelt and emotional new single. “The song is to celebrate the precious friendship we built during our school days. We have since become good friends despite of our different backgrounds. This song is also a reminder to treasure everything around us. We may grow apart, but never forget the dreams we once shared,“ said Shila.

“It brought back many nostalgic memories of the days I spent together with my schoolmates and teachers. There were many jokes and laughter whenever I speak Mandarin with my Chinese classmates. I have learnt so much and improved my Mandarin from them. I am still grateful till today and remain friends with them,” she added.

Both Malay and Mandarin versions of “Kita” will also be available on major platforms such as Apple Music, Spotify and KKBox.

RESCUERS trying to free a pod of whales beached off the Australian island of Tasmania said on Sept 23 they had found another...
Read more

Subway system confirmed. Modern Warfare's sixth season is set to launch next week, and the next characters to join the operator roster are iconic campaign...
Read more