Shock footage shows moment US forces carry out raid that... 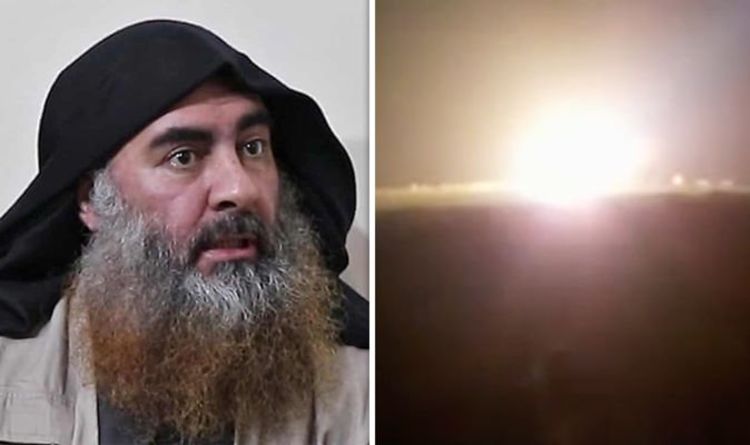 The US military carried out a raid last night that killed ISIS leader Abu Bakr al-Baghdadi. Footage filmed by locals near the small town of Barisha in north-west Syria shows the moment US forces struck the location where Baghdadi was hiding. In the video, helicopters can be heard overhead before a huge explosion hits a building.

US President Donald Trump used a White House address to reveal that the US had brought the “world’s greatest terrorist leader to justice”.

He claimed that Baghdadi died “whimpering and crying and screaming” after running into a dead-end tunnel.

President Trump said while eleven young children were safely moved out of the house, al-Baghdadi brought three of his young children with him as he tried to escape down the tunnel.

He then ignited a suicide vest, which also killed his three children.

It is thought that the US special forces blew up the house where al-Baghdadi was found to eliminate the possibility of the site becoming a shrine to the leader.

The raid, which took place after midnight on Saturday, is thought to have involved helicopters, warplanes and a ground clash.

The commander of the Kurdish-led Syrian Democratic Forces, Mazloum Abdi, said earlier today that a “historic, successful operation” had resulted from “joint intelligence work” with the US.

Al-Baghdadi has been described as the world’s most wanted man.

The ISIS leader was designated as a “terrorist” in October 2011, with a huge £19.5million reward for information leading to his capture or death.

Earlier this year, ISIS issued a 30-minute audio message purporting to come from al-Baghdadi, in which he said operations were taking place daily.

He had called on supporters to free women jailed in camps in Iraq and Syria over their alleged links to his group.