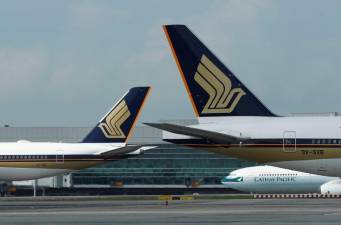 SINGAPORE: State investor Temasek Holdings and others will inject as much as S$ 19 billion ($ 13.27 billion) of liquidity into Singapore Airlines (SIA) in the single biggest rescue for an airline slammed by the coronavirus pandemic.

The massive financing plan, which drove SIA shares down as much as 10.5% on Friday, underscores the depth of financial trouble for the global airline industry, with nearly one-third of the world’s aircraft already grounded because of the pandemic, according to data provider Cirium.

Many governments worldwide have already stepped in to help airlines amid the virus-induced travel slump, with the United States offering $ 58 billion in aid. Many carriers have grounded fleets and ordered thousands of workers on unpaid leave to keep afloat.

The S$ 5.3 billion equity and up to S$ 9.7 billion convertible note portions of the Singapore Airlines fundraising are being underwritten by Temasek, which owns about 55% of the group.

“This is an exceptional time for the SIA Group,” SIA Chairman Peter Seah said in a statement late on Thursday.

SIA’s shares went into a rare trading halt earlier Thursday after plunging to their lowest in 22 years this week as investors feared the virus will have a deep impact on the company.

“Under the current dire circumstances, the rights issue is the best tactical move for SIA. It underscores the carrier’s strategic importance to Singapore and the island state’s position as both a financial centre and aviation hub,” Shukor Yusof, head of aviation consultancy Endau Analytics, said in a blog post.

SIA has said it would cut capacity by 96%, ground almost its entire fleet and impose cost cuts affecting about 10,000 staff amid what it called the “greatest challenge” it had ever faced.

Temasek International Chief Executive Dilhan Pillay Sandrasegara said the deal would not only tide SIA over a short-term liquidity challenge but would position it for growth beyond the pandemic.

SIA said it would use the funding from the rights issues to beef up its capital and operational expenditure needs.

On Thursday, the Singapore government announced more than $ 30 billion in new measures to help businesses and households brace against the pandemic.

Finance minister Heng Swee Keat had also said that SIA would announce support from Temasek and that he welcomed Temasek’s decision to support the airline.

Qantas Airways this week secured A$ 1.05 billion ($ 636.1 million) against its aircraft fleet. – Reuters