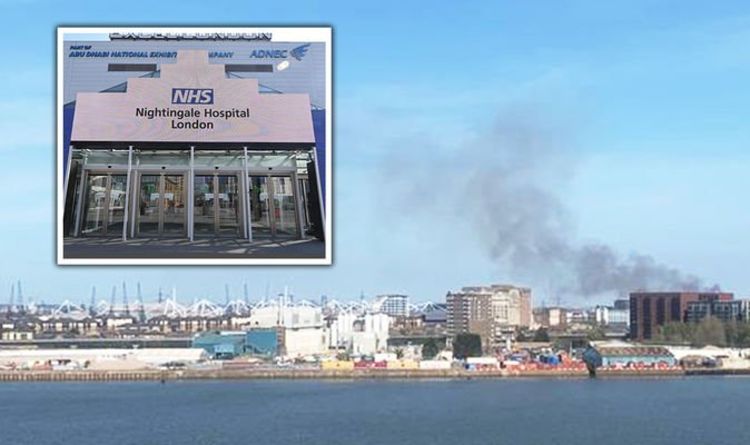 Smoke was spotted rising near London’s ExCel Centre on Tuesday afternoon just before 3pm. Some online commentators questioned whether a fire had broken out near the site of the converted Nightingale Hospital. The smoke appeared to originally rise from behind the hospital building – before then moving above the ExCeL centre.

Video footage from other side of the river Thames shows large plumes of thick black smoke bellowing over the East London area.

One user wrote on Twitter: “A rather large fire behind the excel nightingale hospital.”

A second user said: “Looks like there is a fire close to Excel / NHS Nightingale.”

The London Fire Brigade (LFB) has since confirmed six crews and around 40 firefighters were called to a blaze in the Beckton area.

The LFB were alerted to fire at a garden on Brandreth Close shortly before 3pm.

At least three properties and a number of wooden sheds are also alight.

The cause of the fire is not yet known.

At this stage there are no reports of any injuries.

A spokeswoman for the London Fire Brigade told Express.co.uk: “Six fire engines and around 40 firefighters have been called to a fire at a garden on Brandreth Close in Beckton.

“Part of the ground floor and first floors of a pair of semi-detached houses are alight. A number of wooden sheds at the rear of the properties are also alight.

“The Brigade’s 999 Control Officers have taken 43 calls to the blaze.

The NHS Nightingale Hospital was formally opened at the ExCel centre last Friday by the Prince of Wales.

Prince Charles did not formally attend the opening of the health care centre and spoke via video-link from Balmoral.

The facility, named after nursing pioneer Florence Nightingale and will have up to 16,000 staff.

The hospital is split into more than 80 wards containing 42 beds each, the facility will be used to treat Covid-19 patients who have been transferred from other intensive care units across London.

It was set up by NHS contractors in just over a week with the assistance of around 200 military personnel.