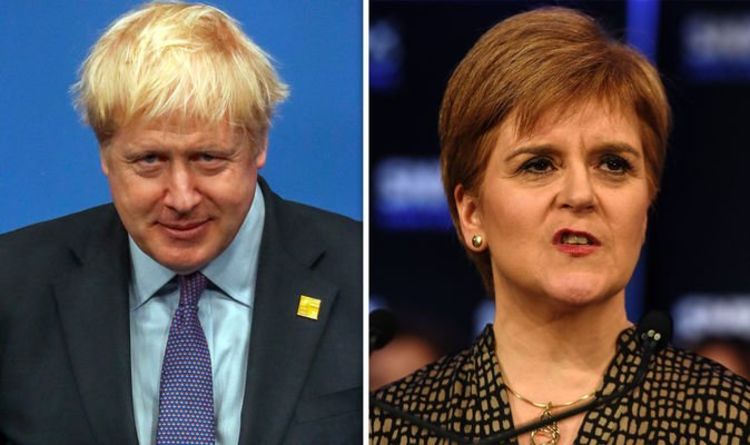 Last week, Boris Johnson formally rejected Nicola Sturgeon’s call for a second independence referendum. The First Minister is now expected to set out her “next steps” within days but her spokesman has already insisted her ministers are still committed to holding a referendum this year. Meanwhile, yesterday thousands of people joined a march in Inverness supporting calls for Scottish independence.

As a constitutional stand-off between the Prime Minister and Ms Sturgeon now seems inevitable, recent reports suggest Mr Johnson might have another of his “oven-ready” plans to prevent the break of the Union.

At the beginning of January, it emerged Mr Johnson was planning radical constitutional reforms, including reforming the House of Lords.

According to the Times, the proposals were drawn up by Lord Salisbury, the former leader of the House of Lords, who is currently advocating with the Constitution Reform Group (CRG) for the Act of Union Bill.

The Bill, which is said to be “on the desk” of Mr Johnson’s team, forms a sort of manifesto for the constitutional change that the CRG thinks is both necessary and inevitable.

The blueprint proposes a federal structure for the continuation of the Union, establishing the principle of self-determination among all four parts, as well as radical reforms in Westminster.

In an interview with Express.co.uk, Gisela Stuart, who is on the steering committee of the CRG, explained how the Bill could save the future of the Union.

The former Labour MP and chair of the successful Vote Leave campaign said: “The United Kingdom is a union of four significant component parts.

“And if you want to devolve power, rather than having the centre as this gracious giver of power it has, we want to reverse the assumption.

“We want to say: ‘all powers are devolved other than the ones which aren’t’.

“So the centre has to justify its existence and that empowers and strengthens the local decision making.

“This is a debate which we never had.

“We really need to have it if the UK wants to continue to exist with some strength.”

The Bill would only come into force if approved by a referendum with a majority of votes cast in the UK as a whole at 65 percent and on a majority in each of England, Scotland, Wales and Northern Ireland.

Member of the steering committee of the CRG lawyer Daniel Greenberg explained in a recent report for Brexit Central how a federal structure for the UK could solve the crisis.

He wrote: “The different voting patterns in the Brexit referendum in different parts of the United Kingdom have suggested that different parts may have different aspirations for membership of, or at least for any future relationship with the European Union.

“As presently constituted, there is little or no room for individual arrangements between parts of the United Kingdom and the European Union.