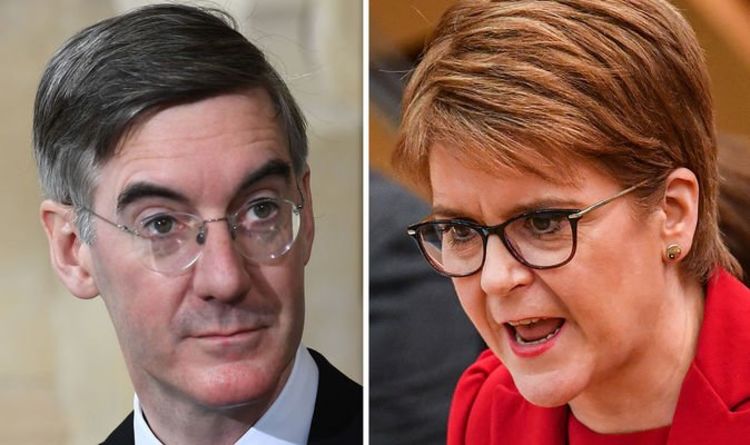 Boris Johnson formally rejected Nicola Sturgeon’s call for a second independence referendum last week, but the First Minister’s spokesman insisted her ministers are still committed to holding Indyref2 this year. He said the SNP’s position was “endorsed” by voters in last month’s general election, when the nationalists won 47 of the 59 seats available in the country. Ms Sturgeon is expected to set out her “next steps” within days.

Meanwhile, an estimated 80,000 people braved wind and rain to march for Indyref2 in Glasgow last Saturday.

As a constitutional crisis now seems more inevitable than ever, a 2013 report by The Telegraph sheds some light on how the UK Government might act in order to protect the Union.

Before the 2014 Scottish referendum, now Cabinet Minister Jacob Rees-Mogg dubbed the manner in which the Union favours Scotland “absurd” but urged the English to tolerate it as a price of retaining the UK’s greatness.

The Conservative MP for North East Somerset warned at a fringe meeting during the 2013 Tory conference that the remainder of the UK would become a “small, shrunken, shrivelled place” and “London Plus” without Scotland.

He said it was “very unfair” on the English that Scottish MPs could impose health and education policies that did not apply in their own constituencies but this should be seen as a “price worth paying”.

He noted that this is “clearly absurd and very unfair on the English”, but added that “those of us who are English should feel that this is a price worth paying for the United Kingdom”.

The Tory MP said: “We should argue back to those people that the view of the nation that they take becomes narrow if it’s purely English, makes us such a small, shrunken, shrivelled place that we need to accept that the cost of the Union is this over-representation of the smaller parts that come into it.

“And that is in fact the only answer to the West Lothian Question, to say because of the view we have of our greatness as a nation, we accept we need to be bigger than London-Plus, which is what we would end up being.”

Although they were not consulted, he claimed the English should think carefully about the independence vote and conclude “we have to make a sacrifice” to preserve the “nation that has done more good in the world than any other country you can name”.

- Advertisement -
Facebook
Twitter
Pinterest
WhatsApp
Linkedin
ReddIt
Email
Tumblr
VK
Previous articleCoronavirus in France: Is it safe to travel to France? Deadly virus hits Europe
Next articleCoronavirus: Why it is EASIER for viruses to spread in the winter months