Soho: Thousands of drinkers took to the streets (Image: GETTY)

Crowded scenes in one of London’s biggest party districts has sparked concern that people were not following social distancing rules. Many took to Twitter to share videos and pictures of the “absolute madness” as the streets appeared rammed with people stood close together.

Another social media user was concerned about coronavirus cases rising after people being in such close proximity.

They wrote on Twitter: “Soho, London, earlier this evening. Wondering how quickly this will hit the R rate…”

A third person added they thought the packed streets were “embarrassing”.

They said: “Soho and England. What a slap in the face for the NHS, police, fire service, teachers and all those in the public sector. 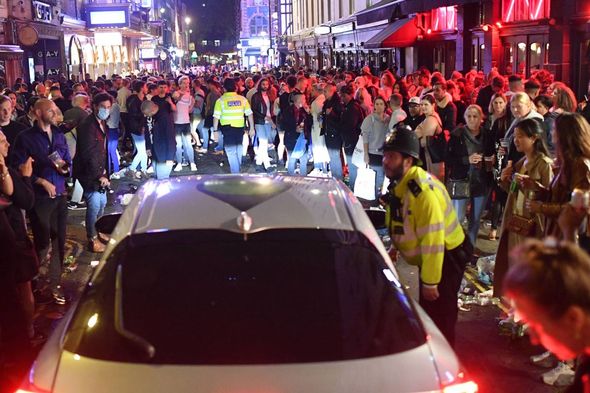 Soho: Cars were seen struggling to drive through the crowded streets (Image: GETTY)

“Please tell me how to tell my Year 6 bubble to social distance whilst adults don’t? I’m so so angry. Embarrassing.”

Another person said: “I’m horrified by the sights in Soho tonight.”

But another person questioned Mr Johnson’s reasoning behind allowing pubs to reopen.

They said: “We will all be blamed when for the second peak.

READ MORE: Nigel Farage SILENCES critics as trolls hit out at him for pub visit 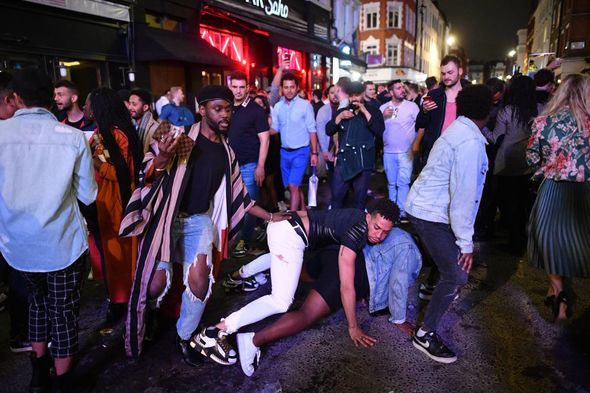 Soho: People were pictured dancing in the streets (Image: GETTY)

“It really comes down to @BorisJohnson making the terrible decision to reopen on #SuperSaturday.

“Why not stagger and ease into a reopening, instead of unleashing the scenes in #Soho that we are seeing. This could have been avoided.

“Videos show cars being unable to srive down the street as people dance and block the roads.”

It comes after Prime Minister Boris Johnson said at a Downing Street press conference on Friday that people needed to focus on ‘supporting the livelihoods of businesses across country’.

But he added people must do so ‘responsibly’.

He said: “Lockdown only succeeded in controlling the virus because everyone worked together, and we will only succeed in reopening if everyone works together again, because we are not out of the woods yet.

“The virus is still with us and the spike in Leicester has shown that. 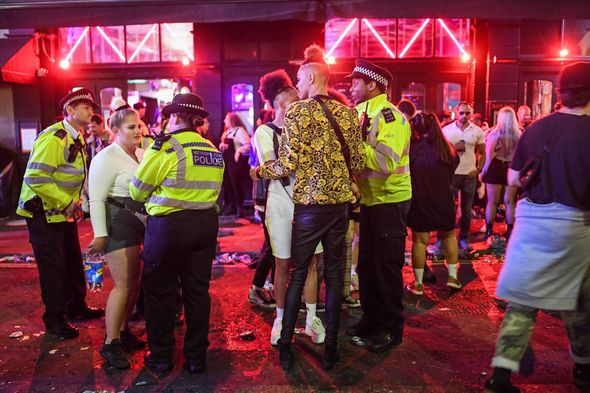 “If it starts running out of control again this government will not hesitate in putting on the brakes and re-imposing restrictions.

“Anyone who flouts social distancing and COVID-Secure rules is not only putting us all at risk but letting down those businesses and workers who have done so much to prepare for this new normal.

“So as we take this next step, our biggest step yet, on the road to recovery, I urge the British people to do so safely.”

The former Politics Live host and stalwart of the BBC's political coverage announced today he will be moving on to become Chairman of GB...
Read more
U.K.

London Metropolitan Police Commisoner Cressida Dick revealed the name of the victim when making a touching tribute to the officer this evening. During a...
Read more
U.K.

Sgt Matt Ratana, died after he was shot at a police station in Croydon in the early hours of Friday Morning. Mr Ratana, died...
Read more
U.K.

Some of the items include only being able to buy three items per customer for flour, dried pasta, toilet paper, baby wipes, and anti-bacterial wipes. Outgoing...
Read more