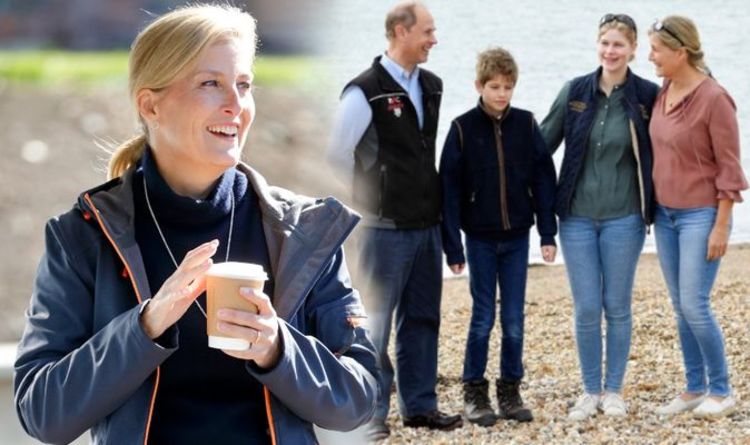 Sophie has been stepping up to the mark lately, something many royal fans have noticed.

The Countess, who as been a working royal for many, many years, is taking on more important patronages and carrying out more duties, alone or with other members of the Royal Family.

It is thought this apparent promotion in duties is to replace the void left by Prince Harry and Meghan Markle, who left the Royal Family in May.

And it’s not just Sophie this has impacted, but it has gone on to include the rest of her family, her husband Prince Edward and their two children.

She looked at the family dynamics, as well as how the two children were adapting to the public role.

Judi James told Express.co.uk: “Louise and James bear some signals of shyness although they both look absorbed when the rubbish-picking starts.

“The suggestion is that this family might have been enjoying the comfort of their lower-profile royal life, but are having to learn to cope with being suddenly thrust into the front line and spotlight now that Andrew, Harry and Meghan have all stepped out of the Firm’s line-up.”

However, doting mum Sophie appears to have thought about this in her approach with her children.

Judi said: “Sophie seems to have managed to make that step-up with a kind of sleeves-rolled-up sense of confidence and duty, but for Edward and the two children it might just be a bit more of a challenge.”

Sophie Countess of Wessex attended an event with a cause close to her heart in recent weeks.

The Countess had a sculpture made of her face, but with one big difference, which was included to highlight an important and poignant message.

The bust was made with one eye shut.

Her daughter Louise was born with an eye condition and had difficulties with her vision growing up.

For this reason, supporting causes for the bling has always been an important element of Sophie’s work with the Royal Family.

As has promoting the role of women in business, as Sophie founded and ran her own PR company before she met Prince Edward.

However, a few years after marrying into the Royal Family she gave up private employment.