Sophie Countess of Wessex important role after Meghan royal exit – why was she chosen? 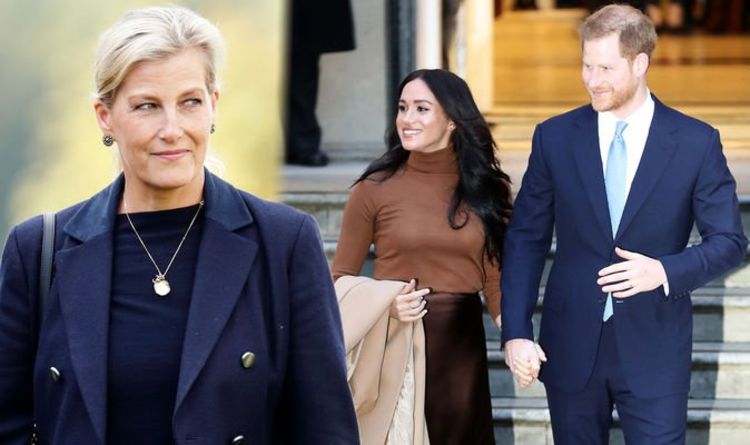 Sophie, Countess of Wessex, and Prince Edward have been married for nearly 21 years.

In this time, she has been a full time royal, having previously worked in different PR roles.

While in the Royal Family, there has been little drama surrounding Sophie which could be one of the reasons she might take on new duties now.

Her former career could also have prepared her for the important duties, royal biographer, Ingrid Seward, claimed in her book, Prince Edward.

READ MORE: Meghan Markle: Did this ‘easy to spot’ sign predict she would step back from royal role?

She wrote: “Any romance with a member of the Royal Family is conducted on their terms. If Sophie had any reservations or complaints, she prudently kept them to herself.

“Being from a PR background, she was fully aware of the real world. She knew what she was getting into.”

Over the last 20 years, Sophie has shown her close bond with her mother-in-law, the Queen.

The monarch appeared to have wanted Sophie as a guide for younger royals entering the family, it has been reported.

This would suggest she is happy with how the Countess deals with royal life, body language expert Judi James, suggested.

She said: “The Queen’s body language with Sophie always suggests her daughter-in-law is a bit of a confidante, with Sophie’s relaxed, constantly calm and upbeat demeanor seeming to allow the Queen to relax more in her company, too.”

Not only do they appear to get on, Queen Elizabeth II could be impressed with how Sophie has handled her role.

“Her long-term marriage to the royal prince who once seemed the least likely to settle down after some fickle career choices suggests she’s a great stabilising influence.”

Meghan Markle had been a working member of the Royal Family since she married Prince Harry in 2018.

Last month, the couple announced their plans to “step back” from the role in a lengthy post published online.

It read: “After many months of reflection and internal discussions, we have chosen to make a transition this year in starting to carve out a progressive new role within this institution.

“We intend to step back as ‘senior’ members of the Royal Family and work to become financially independent, while continuing to fully support Her Majesty The Queen.