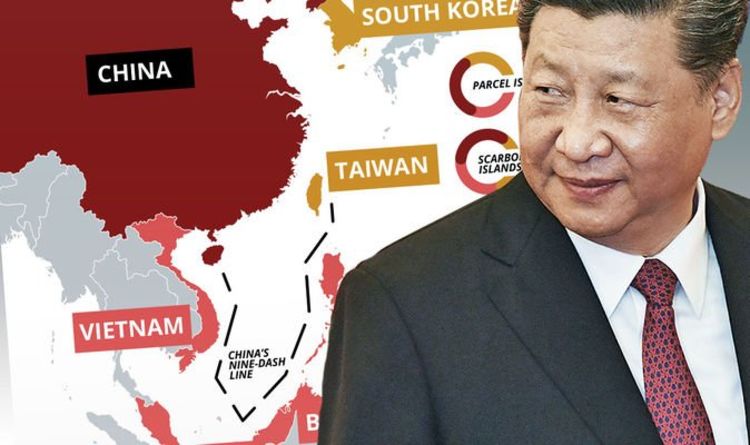 It is also referred to by some as the ’10-dash line’ or ’11-dash line’, and serves as a demarcation for what Beijing believe to be their waters. The South China Sea is hotly contested because of its lucrative shipping lanes, capacity for military strategic advantages and wealth of natural resources such as oil and minerals. At the centre of this disagreement are various island clusters such as the Spratly Islands and the Paracel Islands. China has had particularly tense relations with Vietnam and the Philippines over islands in the region.

China’s Nine-Dash-Line draws a line around all of these islands, asserts sovereignty over all of them, and makes audacious claims about rights to waters within.

As the map shows, the U-shaped marking essentially siphons off the large central part of the sea.

An early map showing a U-shaped 11-dash line was published in the then-Republic of China on 1 November 1947.

Two of the dashes in the were later removed, reducing the total to nine.

Later versions added a dash to the other end of the line, extending it into the East China Sea, which China also has international disputes over, in this instance with Japan.

China added a tenth-dash line to the east of Taiwan island in 2013 as a part of its official sovereignty claim to the disputed territories in the South China Sea.

Island claims are important because under the UNCLOS (UN Convention on the Law of the Sea) negotiated in the Seventies and Eighties, there are no provisions granting ownership of waters without regard to land-based sovereign rights.

Also crucial, is the impact of Economic Exclusion Zones (EEZ) of respective countries, something which China has not always respected.

In 1994, China had a similar confrontation by asserting its ownership of Mischief Reef, which was inside the claimed EEZ of the Philippines.

In 2016, the Philippines won a case in the Permanent Court of Arbitration invalidating China’s claims to almost the entire stretch of sea. China does not recognise the ruling.

The tribunal in The Hague found that China had violated sovereign Filipino rights under the United Nations Convention on Laws of the Sea (UNCLOS).

China may be being challenged by international bodies and their neighbours, but President Xi Jinping remains determined to make the waters his, and his only.