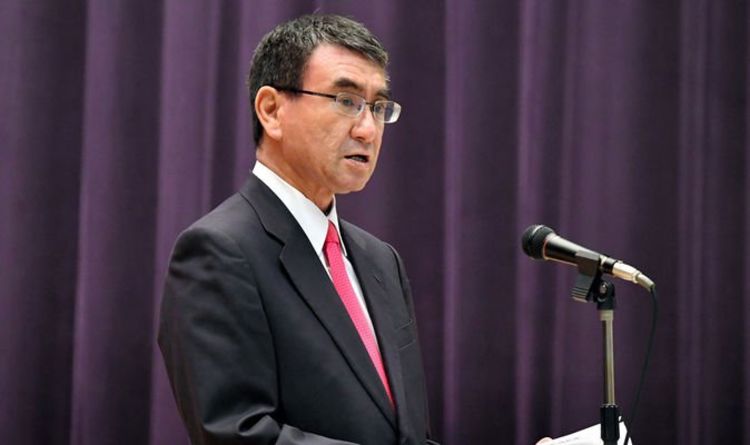 Japan’s Defence Minister Taro Kono has warned Beijing against its growing influence in the world and accused the nation of making “unilateral and coercive attempts” to break international law in the South China Sea. Mr Kano, who has been regarded as a future Japanese Prime Minister, said the international rule of law is “critical” to global stability and “aggressors must be forced to pay the cost”. The Japanese defence minister also highlighted the growing threat posed by the expanding Chinese military including its growing nuclear programme.

Speaking at the Doha Forum, an international conference in Qatar, Mr Kono said: “China is engaging in unilateral and coercive attempts to alter the status quo based on its own assertions that are incompatible with the existing international order.”

Under international law, a large part of the South China Sea comes under Vietnamese sovereignty.

However, Beijing disagrees and says that the entire waterway up to the coasts of the Philippines, Malaysia and Taiwan belongs to China – a claim rejected by an international court of arbitration in 2016.

The South China Sea is one of the busiest shipping lanes in the world.

An estimated £3.95trillion worth of goods passes through it each year.

Mr Kano added Japan “is also concerned about China’s rapid enhancement of its military power without transparency, including its nuclear and missile capabilities”.

He added: “The rule of law, which is of critical importance to global stability and security, is a value shared by the international community, including China.”

The Japanese defence minister added nations cannot be permitted to break the law and “aggressors must be forced to pay the cost”.

Chinese state media is yet to respond by the remarks by the Japanese Government.

However the intervention by Mr Kano comes just days before he is set to meet his counter part in Beijing.

READ MORE: US navy commander lashes out at Beijing for ‘bullying’ neighbours

Ms Murakami highlighted the significance of the timing of the remarks, which came just days after Japan strengthened ties with India.

The professor said: “Coming so soon after security talks between Japan and India, I can only see this as sending a reminder to China that it cannot do whatever it wants, wherever it wants.”

She added: “Japan has to collaborate with other countries in the region if it wants to resist China – I think ‘contain China’ is too strong a term – and Tokyo is working hard to do the same with India.”