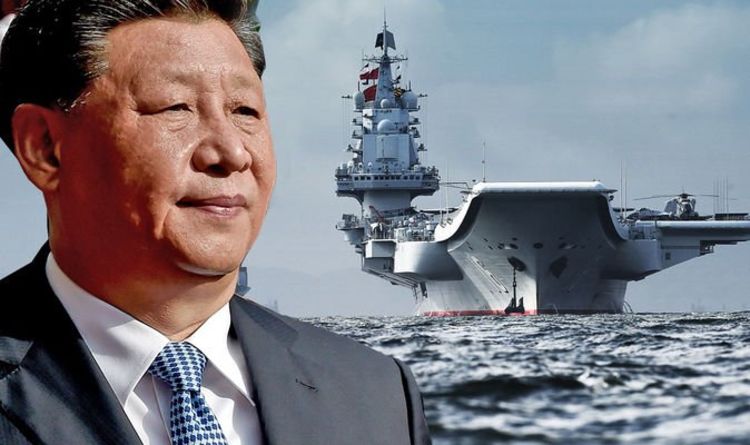 When asked whether China does have a right over the disputed waters, Mr Moss told Express.co.uk: “Not according to the judgement by the permanent court of arbitration in The Hague.

“They derived the judgement from the provisions of UNCLOS which is the statue which was brought into force in December, 1982.

“Certaintly if you look at the judgement which is over 100 pages long, it suggests that China doesn’t have the right to do that.”

Mr Moss also noted there is a real risk of further conflict in the waters.

He said: “I think there’s definitely a risk of all-out conflict.

“There have been pockets of conflict before; going back about 20 years there was a naval battle where three Chinese vessels were engaged with the Philippines Navy gunboats.

“That was in the Spratly Islands.

While senior Trump officials launch diplomatic and rhetorical broadsides at Beijing, the US Defense Department is turning to the firepower of its heavily armed, long-range bombers as it seeks to counter Beijing’s bid to control the seas off the Chinese coast.

Since late January, American B-1B and B-52 bombers, usually operating in pairs, have flown about 20 missions over key waterways, including the South China Sea, the East China Sea, and the Sea of Japan, according to accounts of these flights from US Air Force statements and official social media posts.

These missions, military analysts say, are designed to send a crystal-clear signal: The United States can threaten China’s fleet and Chinese land targets at any time, from distant bases, without having to move America’s aircraft carriers and other expensive surface warships within range of Beijing’s massive arsenal of missiles.

In this response to the growing power of China’s military, the Pentagon has combined some of its oldest weapons with some of its newest: Cold War-era bombers and cutting-edge, stealthy missiles.