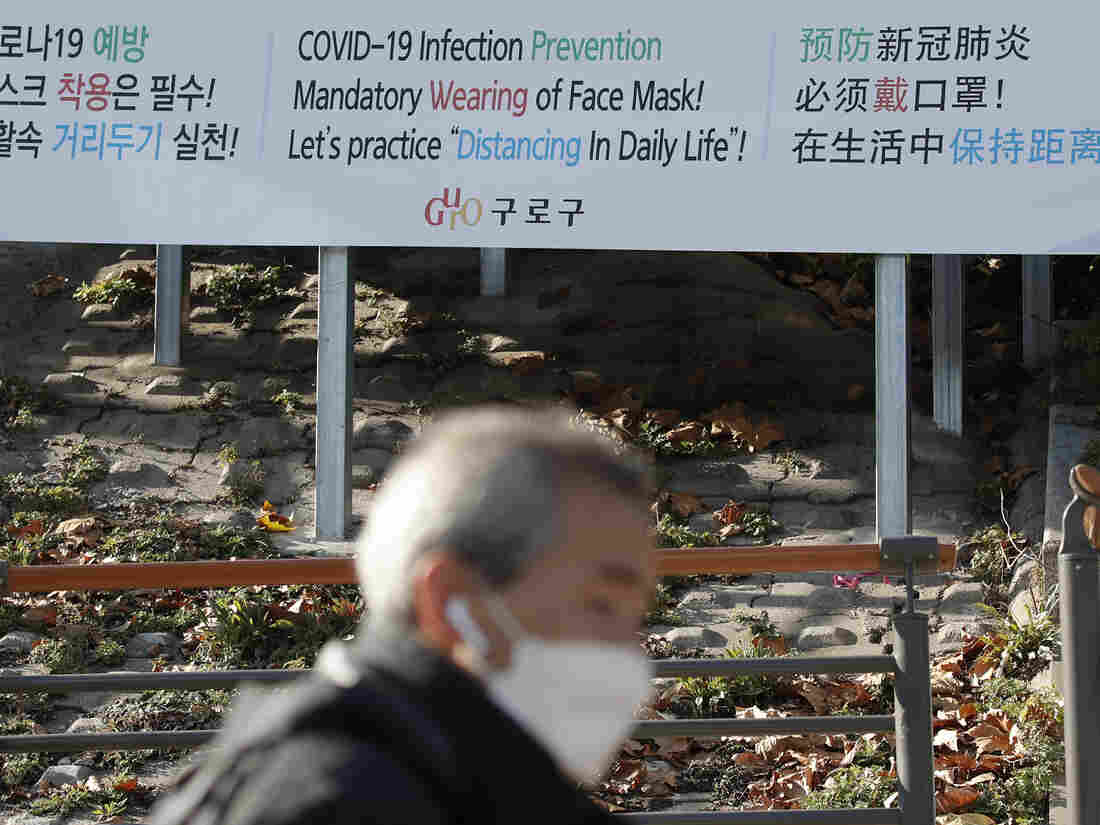 A man wearing a face mask walks past a banner showing precautions against the coronavirus in Seoul on Monday. Lee Jin-man/AP hide caption A man wearing a face mask walks past a banner showing precautions against the coronavirus in Seoul on Monday.

After beating back two waves of coronavirus infections — and garnering international praise for its competent handling of the pandemic — South Korea now finds itself fighting a trickier, stealthier uptick in cases, which has forced it to ramp up social distancing quickly.

The first wave in February was tied to a megachurch and centered on the fourth-largest city of Daegu. The second wave in August was tied to a fundamentalist church and anti-government rallies in Seoul. The government moved quickly to isolate and test these clusters.

But the current crop of cases, the Korea Disease Control and Prevention Agency (KDCA) says, appears to have no links to any major groups or events. Instead, the virus appears to be spreading quietly through community infection, involving small gatherings of family and friends and making the virus’s path harder to trace.

“Contact between people increased through travels, events and gatherings after the social distancing regulations eased in October,” KDCA Director Jeong Eun-kyeong explained to reporters Monday, “while infected patients with no symptoms or mild symptoms have been piling up.”

Patients in their 20s accounted for the largest increase last week, prompting the government to take extra preventive measures at schools, academies and cafes frequented by students.

The government has decided to raise the alert level twice in the Seoul area recently. The first went into effect last week, and the second is scheduled to start Tuesday, ultimately reaching the second level of a five-tier system.

Once that takes effect, gatherings of 100 people or more will be banned, nightclubs must suspend business, and restaurants will be limited to delivery and takeout business only after 9 p.m.

Local governments have some latitude to tailor social distancing to their situations. Seoul, which has the most cases, will reduce public transportation after 10 p.m. and ban political rallies of 10 people or more. The measures will remain in effect until year’s end.

South Korea has had about 31,000 confirmed coronavirus cases and more than 500 deaths. While these numbers remain low by international standards, South Korean authorities are worried because new cases are increasing at a rate similar to the first and second waves.

“If we fail to break the chain of infections, antivirus measures and medical efforts would not be sustainable,” Second Vice Health Minister Kang Do-tae told senior health officials Monday, according to Yonhap News Agency.

NPR’s Se Eun Gong in Seoul contributed to this report.