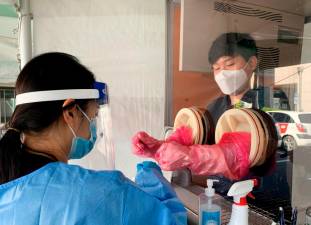 AS THE coronavirus pandemic began sweeping through South Korea late in February, doctor Nam Ha-jong received an order to report overnight to Daegu, a city that was to become the epicentre of infections.

With little formal training in treating virus victims and just two hours of instruction in the use of personal protective gear, the 30-year-old was sent to track down likely patients.

As fear of the new disease gripped the country, Nam went door to door from dawn to dusk each day, wearing full protective gear to perform the testing of members of an obscure religious group at the centre of the outbreak.

“We were exhausted, scared, and felt like being thrown in as a shield to fight against an enemy that no one knew about,“ said Nam, who spent three weeks working in Daegu, a city of about 2.4 million southeast of the capital, Seoul.

A nurse and driver helped him run tests at the homes of suspected victims. Many in the religious group wanted to keep secret even the fact of having been tested, so Nam had to shoo away curious neighbours.

Nam was one of 1,900 young men conscripted from medical school to serve a term of 36 months as a public health doctor instead of regular military service.

That is compulsory in South Korea, which is technically still at war with the North, since the neighbours ended the Korean War with only a truce, instead of a peace treaty.

After eight months on the frontlines of the virus battle, the young doctors are credited with pulling off the strategy to target hotspots with rapid, mass testing and contact tracing.

As in the military, they were given no choice, often feeling their efforts went unrecognised, even as South Korea eventually flattened the curve of infections and won global praise for its response.

“Now I feel some people are taking us for granted,“ Nam, who now works at a test centre in Okcheon county, a two-hour drive south of Seoul, said in an interview.

Refusing to serve would have brought punishment in the form of a service extension of five times the length of the hotspot deployment, which typically lasts several weeks.

Experts say the doctors’ efforts were responsible for more than 2.5 million tests among a population of 50 million, as well as a programme of stringent contact tracing.

The doctors are “indispensable”, said Park Yoon-hyung, a specialist in preventive medicine at Soonchunhyang University.

However, he added, “The general public don’t usually appreciate their work, because they think of their service as something obvious.”

As many as 1,000 of the doctors rotated through Daegu in March to fight an outbreak that racked up the largest number of infections outside China.

That deployment paved the way for a four-fold increase in daily virus tests, said Sejin Choi of the Korean Association of Public Health Doctors.

In normal times, the routine of a public health doctor can be uneventful, from prescribing blood pressure pills to the elderly or giving vaccinations, usually among a handful of patients.

Now, with dozens of new virus cases each day, the junior doctors, who receive average monthly pay of 2.5 million won (US$ 2,200), are the mainstay of about half the nearly 600 test centres nationwide.

Always at the ready to rush to any new major disease cluster, the doctors can also be assigned as airport quarantine officers to guard against external infections.

“Our role is little known outside,“ said Choi Seung-jin, one of the conscripted doctors who spent six weeks at a temporary testing facility near Seoul’s Incheon airport.

“But our job has never subsided,“ added the 32-year-old, who will complete his service next April. “I am constantly worried that cases can explode at any time. I have stopped wishing for this to be over soon.” – Reuters