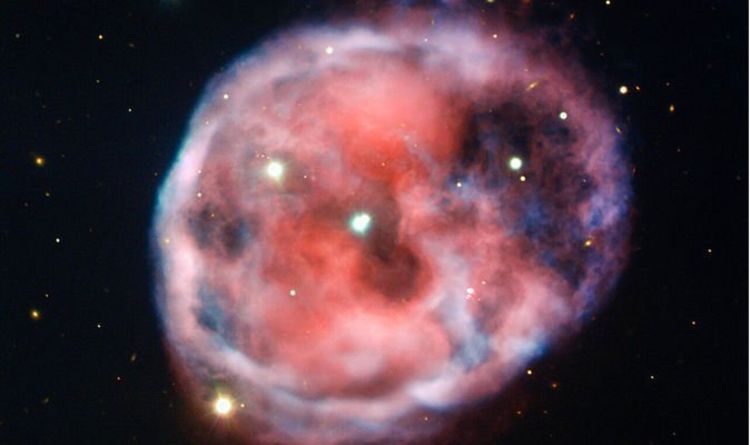 The more imaginative among astronomers have long suggested this interstellar cloud of dust bears a vivid resemblance to a spine-chilling skull as it sinisterly floats through space.

But its eye-catching aesthetics is not the only reason why the Skull Nebula is it of interest to astronomers.

The planetary nebula is also the first-known object to be associated with a brace of closely-bound stars orbited by a third outer star.

The ESO said in as statement: “Also known as NGC 246, the Skull Nebula lies about 1,600 light-years away from Earth in the southern constellation of Cetus.

“It formed when a Sun-like star expelled its outer layers in its old age, leaving behind its naked core — a white dwarf — one of two stars that can be seen at the very centre of NGC 246.”

Although this nebula has been known to scientists for centuries, it was only in 2014 that astronomers discovered the white dwarf and its companion concealed a third star.

The star lay hidden for so long as it was situated at the Skull Nebula’s heart.

And taken as a whole, these three stars establish NGC 246 as the first-known planetary nebula with a hierarchical triple stellar system at its centre.

The ESO added: “Taken by the FORS 2 instrument on ESO’s VLT in the Chilean Atacama Desert, this new image of the Skull Nebula intentionally captures light emitted in some narrow ranges of wavelengths — those associated with hydrogen and oxygen gas.

“Observations of light emitted by particular elements help reveal a wealth of information about an object’s chemical and structural compositions.

“This new image of the Skull Nebula highlights where NGC 246 is rich or poor in hydrogen (shown in red) and oxygen (depicted in light blue).”

The European Southern Observatory is not the only space agency to release eerie images to coincides with Saturday’s Halloween.

US-based space agency NASA has released a horrifying photo of the Sun as you have most likely never seen it before.

NASA wrote in a statement accompanying the blood-curdling photo: “Active regions on the sun combined to look something like a jack-o-lantern’s face.

“The active regions appear brighter because those are areas that emit more light and energy — markers of an intense and complex set of magnetic fields hovering in the sun’s atmosphere, the corona.

“This image blends together two sets of wavelengths at 171 and 193 angstroms, typically colorised in gold and yellow, to create a particularly Halloween-like appearance.”