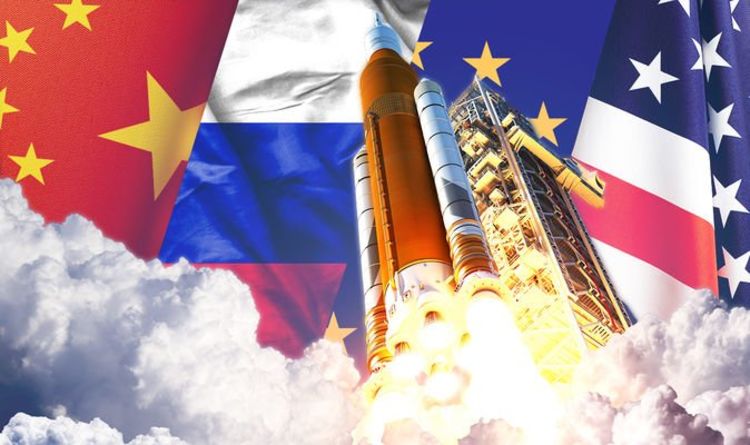 Scientists are continuing to push boundaries in an attempt to understand and explore the infinite depths of the Universe. Many milestones have been passed since the US and Russia made their first forays into space in the 1950s. These traditional space superpowers have now been joined by China and the EU, who are all readying to race to Mars during Red Planet rover exploratory missions.

The Elon Musk-owned SpaceX is planning 24 Starlink launches throughout the course of the year, and 12,000 communication satellites will eventually enter near-Earth orbit.

Starlink’s aim is to provide cheap and fast internet to the world’s most remote areas without an internet connection.

Between January and March 2020 SpaceX’s Crew Dragon 2 will for the first time ferry US astronauts to the International Space Station (ISS).

Before SpaceX, space agency NASA was reliant on Russian spacecraft to get to and from the orbiting space laboratory.

The spacecraft has two planned variants, with the first being the Crew Dragon, a capsule capable of transporting up to seven astronauts.

The other variant, the Cargo Dragon, is an updated replacement for the original SpaceX Dragon.

Another noteworthy space mission taking place in 2020 is the Solar Orbiter (SolO).

The ESA satellite will travel inside the orbit of Mercury to perform close-up, hi-resolution studies of our Sun and inner heliosphere.

The plan is for the orbit to endure the star’s fierce heat and carry its telescopes to just one-fifth of Earth’s distance from the nearest star.

Earth’s next nearest star is Alpha Centauri, which is actually three stars bound together by gravity that are, on average, 4.3 light-years away from Earth.

Despite 2020 looking very positive for space exploration, scientists are already getting ahead with the space race.

Boeing recently launched their Starliner capsule into space to embark on a journey to rendezvous with the International Space Station.

This is merely a test flight with no human passengers on board.

Starliner will carry food, equipment and a test dummy named Rosie the Astronaut. This is the very last trial before the capsule can start shuttling astronauts to and from space in 2020.

Libby Jackson, human exploration programme manager at the UK Space Agency said: “We’re looking forward to the future of space exploration and this Boeing launch is a step along that.”

The NASA BioSentinel mission was selected as the sole biological experiment, to fly on the Space Launch System’s first Exploration Mission (EM-1) planned to launch in 2020.

The primary objective of BioSentinel is to develop a biosensor to detect and measure the impact of space radiation on living organisms over long durations beyond Low Earth Orbit.

The BioSentinel biosensor will use the yeast Saccharomyces cerevisiae to improve understanding about how biology responses to ambient deep space radiation.

The US is not the only country taking part in the race to the Red Planet as both Russia and China are planning missions for 2020.

Russia will release its ExoMars Rover together with the European Space Agency (ESA) to the red planet, which will touch down on Mars in February 2021.

The robot-like device will then start its search for Martian life and explore the many unknown aspects of the planet.