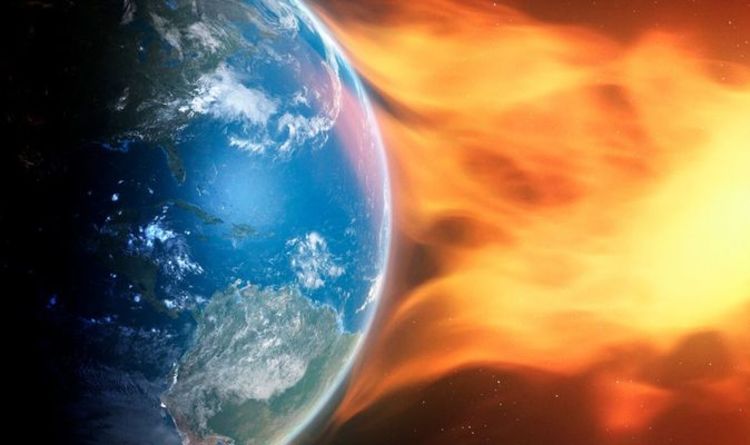 Solar winds being blasted from the Sun have finally hit Earth, with the planet in the midst of a solar storm, experts have stated. Cosmic forecasters were stunned by the “unexpected” solar particles, which have made their way across 150 million kilometre journey from the Sun to Earth. Researchers state that the solar winds are bombarding the Earth at 450 kilometres per second, or 1,620,000 kilometres per hours.

“The stream’s velocity is only moderately high (~450 km/s) but it contains south-pointing magnetic fields that can open cracks in Earth’s magnetosphere.

“Arctic sky watchers should be alert for auroras mixed with springtime twilight.”

As the magnetosphere gets bombarded by solar winds, stunning blue lights can appear as that layer of the atmosphere deflects the particles.

However, researchers also note the consequences of a solar storm and space weather can extend beyond northern or southern lights.

For the most part, the Earth’s magnetic field protects humans from the barrage of radiation which comes from sunspots, but solar storms can affect satellite-based technology.

Solar winds can heat the Earth’s outer atmosphere, causing it to expand.

This can affect satellites in orbit, potentially leading to a lack of GPS navigation, mobile phone signal and satellite TV such as Sky.

Additionally, a surge of particles can lead to high currents in the magnetosphere, which can lead to higher than normal electricity in power lines, resulting in electrical transformers and power stations blowouts and a loss of power.

There are also reports that some buildings set on fire as a result of the electrical surge.

However, a recent study has found these solar storms should happen every 25 years on average, meaning we are well overdue.