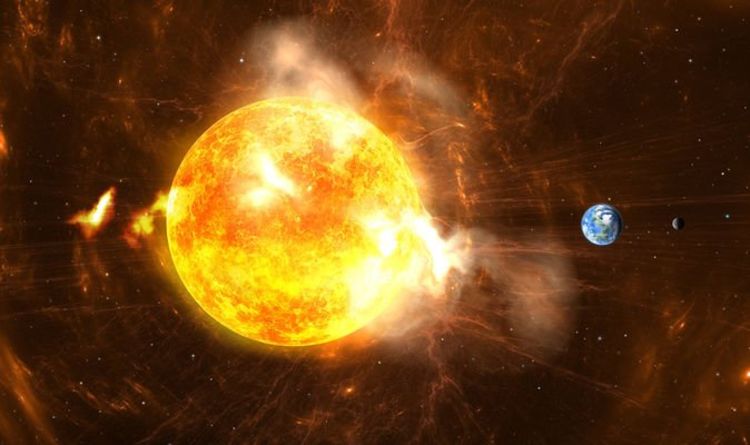 Solar storms wreak havoc on global technology as the radiation which pummels our planet from the Sun heats up the outer atmosphere, causing it to expand. This means satellite signals will struggle to penetrate the swollen atmosphere, leading to a lack of Internet service, GPS navigation, satellite TV such as Sky and mobile phone signal.

Additionally, increased currents in the Earth’s magnetic field – or magnetosphere – could theoretically lead to a surge of electricity in power lines, which can blow out electrical transformers and power stations leading to a temporary loss of electricity.

There are also reports that some buildings set on fire as a result of the electricity surge.

Now, a new study has found that these solar storms should happen every 25 years on average, meaning we are well overdue.

The last ‘great’ solar storm came in 1989, when a major power outage occurred in Quebec, Canada.

In 2012, a great solar storm also occurred, but it narrowly missed Earth.

The researchers said that if it had hit Earth, it could have downed technology on our planet.

Lead author Professor Sandra Chapman, from the University of Warwick’s Centre for Fusion, Space and Astrophysics, said: “These super-storms are rare events but estimating their chance of occurrence is an important part of planning the level of mitigation needed to protect critical national infrastructure.

“This research proposes a new method to approach historical data, to provide a better picture of the chance of occurrence of super-storms and what super-storm activity we are likely to see in the future.”

Professor Richard Horne, who leads Space Weather at the British Antarctic Survey, said: “Our research shows that a super-storm can happen more often than we thought.

DON’T MISS
Solar storm WARNING: New York could be without power for TWO years [ANALYSIS]
Northern Lights in US and Canada: What time will auroras be visible? [INSIGHT]
Solar storm: The Sun’s blasting energy that can ‘destroy’ Earth tech [RESEARCH]