A SpaceX Dragon cargo ship loaded with 2.2 tons of supplies and equipment caught up with the International Space Station early Monday and then stood by while astronaut Jessica Meir, operating the lab’s robot arm, locked onto a grapple fixture to wrap up a flawless rendezvous.

It was the 20th and final flight of Dragon capsule under SpaceX’s initial resupply contract with NASA and the last to be captured by the robot arm as the California rocket-builder transitions to a second-generation spacecraft that will fly itself in for docking starting later this year.

“The SpaceX 20 mission is a milestone,” Meir radioed after the spacecraft’s capture at 6:25 a.m. EDT. “It is, of course, the 20th SpaceX cargo mission, but it is also the last SpaceX cargo vehicle captured by the Canada arm as future vehicles will automatically dock to the space station. … Congratulations to SpaceX and all of the ISS partner teams involved.” 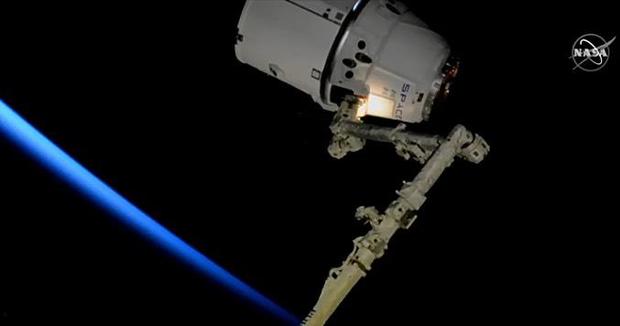 A SpaceX Dragon cargo ship launched Friday from Cape Canaveral caught up with the International Space Station early Monday and was captured by the lab’s robot arm. NASA TV

Launched late Friday from the Cape Canaveral Air Force Station, the Dragon spacecraft executed a textbook rendezvous with the station, bringing a bounty of needed crew supplies, science gear and space station equipment, including a European Space Agency experiment platform that will be attached to ESA’s Columbus lab module.

Packed inside the Dragon’s pressurized cabin were 2,116 pounds of research material and experiment hardware, 123 pounds of spacewalk equipment, 483 pounds of space parts and other station gear and 602 pounds of crew supplies.

“Some of the things the astronauts can be looking forward to include some candy and olives, salami as well as fresh food like grapefruit, orange(s), apples and even fresh garlic,” said Leah Cheshier, NASA’s mission control commentator.

SpaceX launched the first Dragon flight to the space station under NASA’s Commercial Resupply Services program in 2012. The company’s initial CRS-1 contract, now valued at just over $ 3 billion, ultimately was extended to 20 flights, delivering more than 94,000 pounds of cargo. NASA later awarded a follow-on contract for additional missions through 2024. 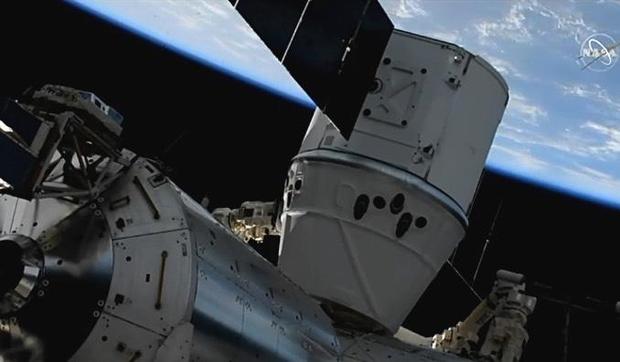 A little less than two hours after capture, the station’s robot arm pulled the Dragon in for berthing at a port on the Earth-facing side of the lab’s forward Harmony module. NASA TV

Those flights will be carried out by reusable Dragon capsules based on the design of SpaceX’s astronaut ferry ships. Equipped with the same propulsion, navigation and control systems, the next-generation Dragons will be able to fly themselves all the way in for docking without requiring use of the station’s robot arm.

Northrop Grumman also holds CRS contracts to deliver supplies to the space station using the company’s Cygnus cargo ships and the company has carried out 13 cargo runs to date. But only the Dragon is capable of returning equipment and research samples to Earth — some 74,000 pounds worth going into the current mission.

The CRS-20 Dragon that arrived Monday is expected to remain at the station for 28 days. After unloading the newly arrived cargo, the astronauts will repack the spacecraft with some 3,700 pounds of research samples, equipment in need of repairs or refurbishment and trash. Unberthing and splashdown in the Pacific Ocean west of Baja, California, is targeted for April 6.