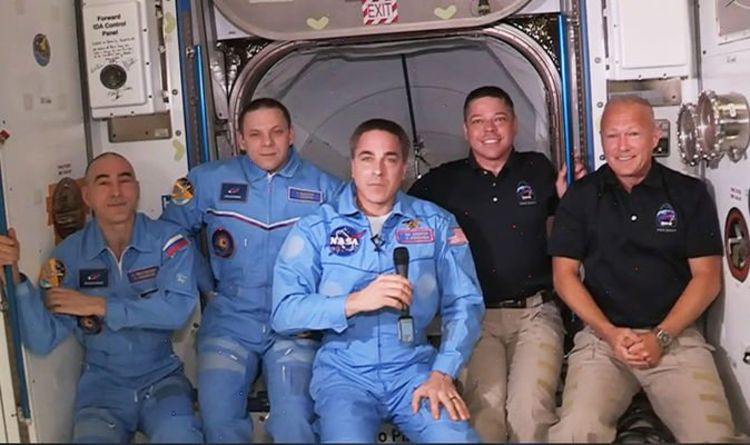 Upon arrival, NASA’s astronauts fielded questions from the ground, during a televised conference.

Mr Hurley said: “It’s obviously been our honour to be just a small part of this.

“We have to give credit to SpaceX, the Commercial Crew programme and, of course, NASA

“It’s great to get the United States back in the crewed launch business and we’re just really glad to be onboard this incredibly magnificent complex.”

The Crew Dragon launched on Saturday, May 30, from the Kennedy Space Center Launch Complex 39A in Florida, US.

NASA’s astronauts then coasted through space for about 19 hours before reaching the ISS some 262 miles above Earth.

Despite the thrill of the ride, Mr Hurley said the two astronauts still got about seven hours of sleep on the way up.

On June 5, the two astronauts completed their first week in orbit.

NASA said: “New station Flight Engineers Doug Hurley and Bob Behnken are still in a handover period as they wrap up their first work week in space.

“The astronauts familiarized themselves today with medical kits, the food pantry, communication systems and safety procedures.

“They also continued researching space bubbles in microfluids and unpacked Japan’s HTV-9 resupply ship, which arrived six days before they did.”

NASA said: “Although the Crew Dragon being used for this flight test can stay in orbit about 110 days, this specific mission duration will be determined once on station based on the readiness of the next commercial crew launch.

“The operational Crew Dragon spacecraft will be capable of staying for at least 210 days as a NASA requirement.”

Once the in-orbit segment of the mission is concluded, the Dragon will undock from the ISS and head back towards Earth.

The spacecraft will then splash down in the Atlantic Ocean where it will be recovered by SpaceX’s teams.

Speaking of the successful launch on Saturday, SpaceX CEO Elon Musk said: “I’m really quite overcome with emotion on this day, so it’s kind of hard to talk, frankly.

“It’s been 18 years working towards this goal, so it’s hard to believe that it’s happened.”