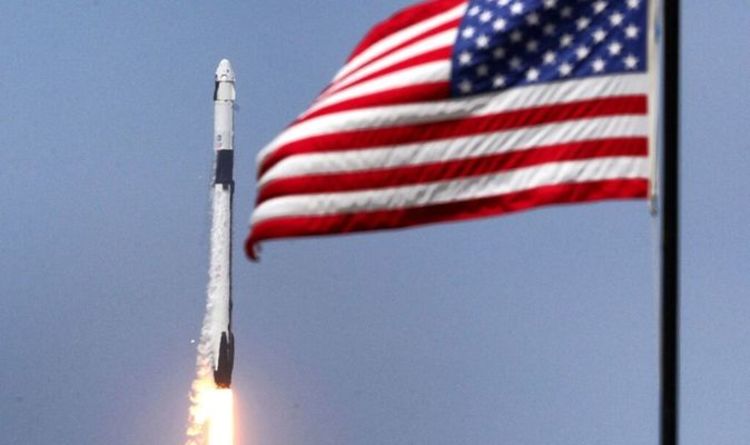 NASA astronauts Bob Behnken and Doug Hurley made history on Saturday, May 30, after they launched from NASA’s Kennedy Space Center in Florida towards the International Space Station (ISS). The history was two-fold, becoming the first launch from American soil since 2011, as well as being the first time astronauts were sent into space on a private space ship.

However, private companies such as SpaceX have now made it affordable for the likes of NASA to launch from home turf once again.

But Roscosmos, the Russian space agency which usually has a good relationship with NASA, has slammed the US space agency and Elon Musk’s space agency for the perceived lack of respect.

Following the successful launch, Elon Musk said: “The trampoline is working. It’s an inside joke.”

Mr Musk’s jibe was in reference to a quote from Roscosmos chief Dmitry Rogozin, who in 2014 said the US might as well “deliver its astronauts to the ISS by using a trampoline” — a reference to how the US had to rely on Russian spacecraft to launch astronauts into space since 2011.

Mr Rogozin has now reignited the war of words with Mr Musk and NASA, claiming they do not show the Russian space agency enough respect.

In an article for Russia’s edition of Forbes, Mr Rogozin said: “When our partners finally managed to conduct a successful test on their spacecraft, there were nothing but jokes and mockery directed at us.

“Our country was the first to send a man into space. We remain first to this day.”