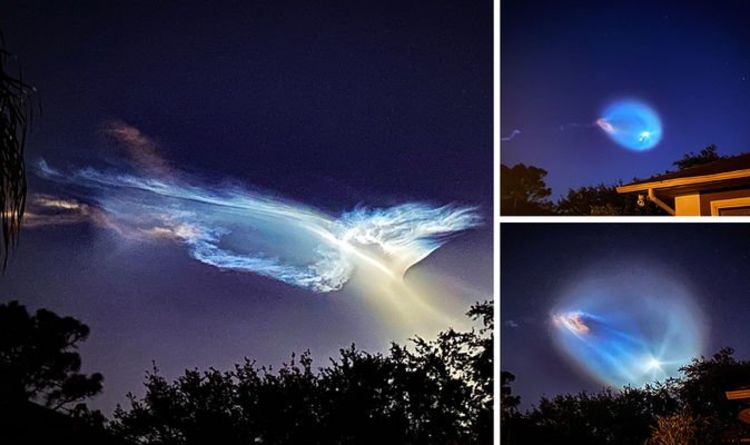 Dawn was beginning to illuminate the cloudless sky.

Beams of sunlight illuminated the exhaust fumes produced by the SpaceX Falcon 9 rocket as it blasted into the atmosphere.

The rocket launch by the Elon Musk-owned SpaceX added to the controversial Starlink constellation in addition to putting three Planet SkySats into orbit as the mission went according to plan.

However, while the SpaceX launches always produce great photos, this one had an extra surprise in store for onlookers, due to an serendipitous celestial influence.

“For one thing, we didn’t know how big the satellites were; that was not public information.”

He added: “And we didn’t know what elevation they were going to be at.

“The combination has made them much, much brighter than we anticipated — that was the big surprise.”

The problem has been particularly noticeable soon after each Starlink launch, before the satellites reach their final orbital altitude of about 340 miles (550km), since they can be seen by the unaided eye during this time.

The first experiment was a variant satellite called DarkSat that launched in January, with a few particularly reflective surfaces painted black.

Although the intervention made the satellite noticeably fainter it remained visible to the unaided eye.

The second experimental satellite launched in the most recent Starlink batch, on June 3.

This design uses visors to block sunlight from reaching the most reflective of the satellite’s surfaces once it reaches its operating altitude.

SpaceX has confirmed all Starlink satellites to launch will carry these visors by the end of the month.

The company’s statement suggests those two approaches aren’t necessarily the only changes SpaceX will try on the Starlink fleet moving forward.

Meanwhile, SpaceX is testing a different solution for managing reflectivity as satellites launch and climb, before the visors can make much of a difference.

Because this experiment operates on the computer code running the satellites, rather than on the satellite as an object, the approach can be applied to already-orbiting Starlink satellites as well as future launches.

This third technique relies on twisting the satellites during crucial points in their orbits so their solar panels lie flat and point directly from Earth to the Sun, almost eliminating the proportion of their surface visible from our planet.

SpaceX believes this should dramatically reduce the satellites’ brightness, although they will still sometimes be visible.