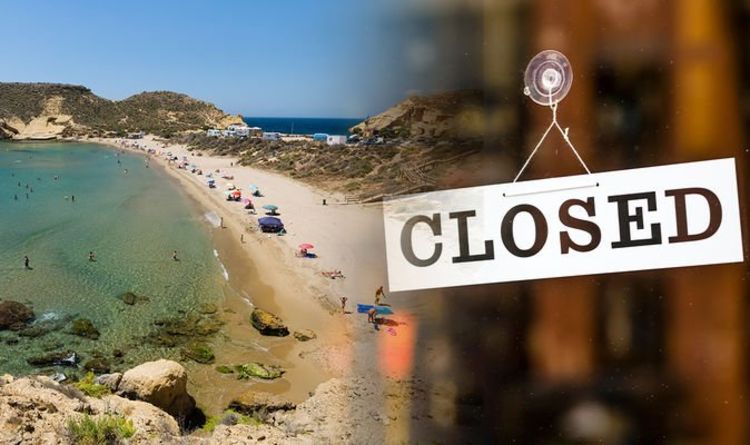 The UK’s coronavirus case count reached over a million on the weekend.

Spain’s coronavirus case rate is also on the rise, hitting more than 1.3 million over the last few days.

The country has been recording around 20,000 new cases a day.

It comes as international tourists visiting Spain fell by 87 percent year-on-year in September.

The latest data from the National Statistics Institute (INE) said that around 75 percent fewer foreign tourists visited Spain during the first nine months of 2020.

READ MORE: Flights: BA and easyJet to issue refunds – but not Ryanair or Wizz Air

The region of Murcia has had travel restrictions put in place which the region’s leading hospitality association has declared could lead to “total ruin” for the sector.

Hostemur president Jesus Jimenez said the Christmas period has been “lost” thanks to the new restrictions.

He added that difficulties could “possibly” continue into the Easter season.

Mr Jimenez told Olive Press: “Travel restrictions between municipalities in the Murcia region as well as between different areas of the country will lead to the total ruin of the hospitality sector.”

He said: “The 11pm curfew in Murcia means that restaurants are losing they evening diners and with just 30 percent interior capacity along with the new travel restrictions, they are in effect closed.”

And it’s not just the hospitality industry that is being impacted.

A new survey by the European Union has suggested that flights to and from Alicante’s airport have collapsed.

The Alicante-Elche airport’s passenger numbers have taken a huge hit with levels equivalent to those last seen in 1973.

The survey, conducted by the Eurostars group for the European Commission, said there are just 38 services scheduled at the airport.