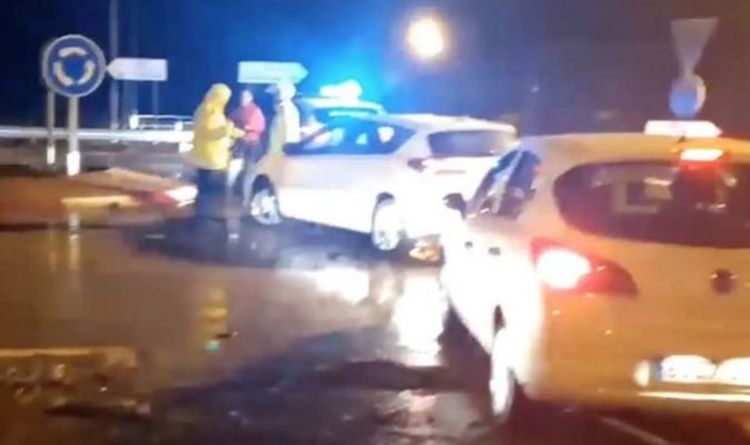 The trio include a mother and her grown-up son whose prefab home was swept away by a swollen river in the village of Vilaverd near the east coast city of Tarragona. The third person search teams are hunting is a 70-year-old man who was carried away by floodwater as he tried to reach his car to move it in the coastal town of Arenys de Mar north of Barcelona.

Thousands of people in Catalonia have been left without electricity following torrential rain.

The latest storms, which come on the back of freak flash floods last month which hit hardest in the Costa Blanca and left seven people dead, have also affected the Balearic Islands.

Three workers were injured yesterday when a whirlwind uprooted their maintenance hut in the Ibizan holiday resort of San Antonio, coinciding with the UK school half-term holidays.

An estimated 200 trees in the area were also uprooted.

The bad weather also caused problems for planes leaving and trying to land at Palma Airport in Majorca, leading to some delays and diversions.

This morning parts of the north-east province of Girona were on red alert, with local authorities warning the river Ter could overflow its banks and advising locals to exercise “extreme caution.”

The seven victims of last month’s storms included a 66-year-old Dutchman whose body was found two days after he vanished on September 15 in Dolores in the province of Alicante.

A British family told at the time how they had to be rescued by the army after becoming trapped in their holiday villa for 12 hours.

Paul and Angie Spencer, from Doncaster, had been staying in Alicante with their four children when a nearby river burst its banks.

Paul said after being rescued: “We knew we were in trouble when the waters rose higher than the kerbs.

“Cars were streaming past, along with furniture, suitcases and even two people who tried to cross the road.

“They just got swept away. Their screams were awful, we don’t know what happened to them.”

A helicopter was due to be mobilised this morning to help in the search for the missing mum and son, believed to be aged around 70 and 40.

Regional Civil Protection chief Sergio Delgado confirmed: “Authorities are searching for two people believed to have been swept away in floods who were in a prefabricated bungalow as well as a person who has disappeared in the Arenys de Mar area.”