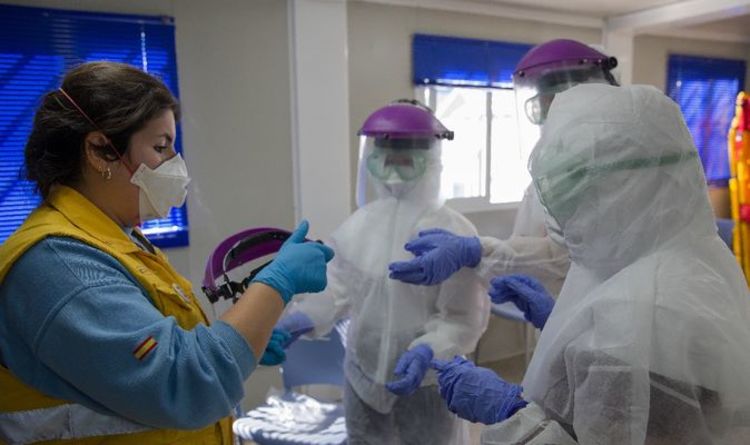 The country’s infection figures have started to fall, with an increase of 637 deaths on Monday that brings the total death toll up to 13,055. The number of cases has been slowing, but the country has the most recorded cases in Europe – 135,000.

In Italy, another heavily impacted country the number of new cases fell by 1,031 to 1,941 on Monday, but the deaths went up to 636 in a day, more than 100 higher than the previous day.

On Monday, Austria’s chancellor revealed plans to start reducing the restrictions put in place to prevent the spread of the virus.

According to data published by Johns Hopkins University, there have been almost 1.3 million cases and 70,800 deaths recorded around the world since the start of the crisis in China in December.

Spain is the second country in the world with he most cases after the United States.

The nation also has the second-highest number of deaths behind Italy.

Spain’s Monday’s death toll of 637 is the lowest recorded so far in almost two weeks, raising hopes that the outbreak might be slowing.

María José Sierra, deputy head of Spain’s health emergency committee, said the pandemic’s growth rate seemed to be slowing down “in almost every region” of the country.

The Spanish government intends to start testing more people, including those with no symptoms.

According to the French finance minister the economic contraction this year would most likely be the worst for the country since World War Two.

In France, figures showed 883 new deaths in hospitals and nursing homes, with a total death toll of 8,911 since March 1.

France’s daily toll was 315 higher than the previous day.

Germany’s Chancellor, Angela Merkel, said the crisis was the biggest challenge the European Union had ever come across.

She added that Germany was willing to help the bloc economically.

- Advertisement -
- Advertisement -
Facebook
Twitter
Pinterest
WhatsApp
Linkedin
ReddIt
Email
Tumblr
VK
Previous articleCelebrities’ Bullying Tactics That Made Them Difficult To Work With
Next articleLaurence Fox: Outrage as sunbathers are told to stay home- 'not everyone has a garden!'