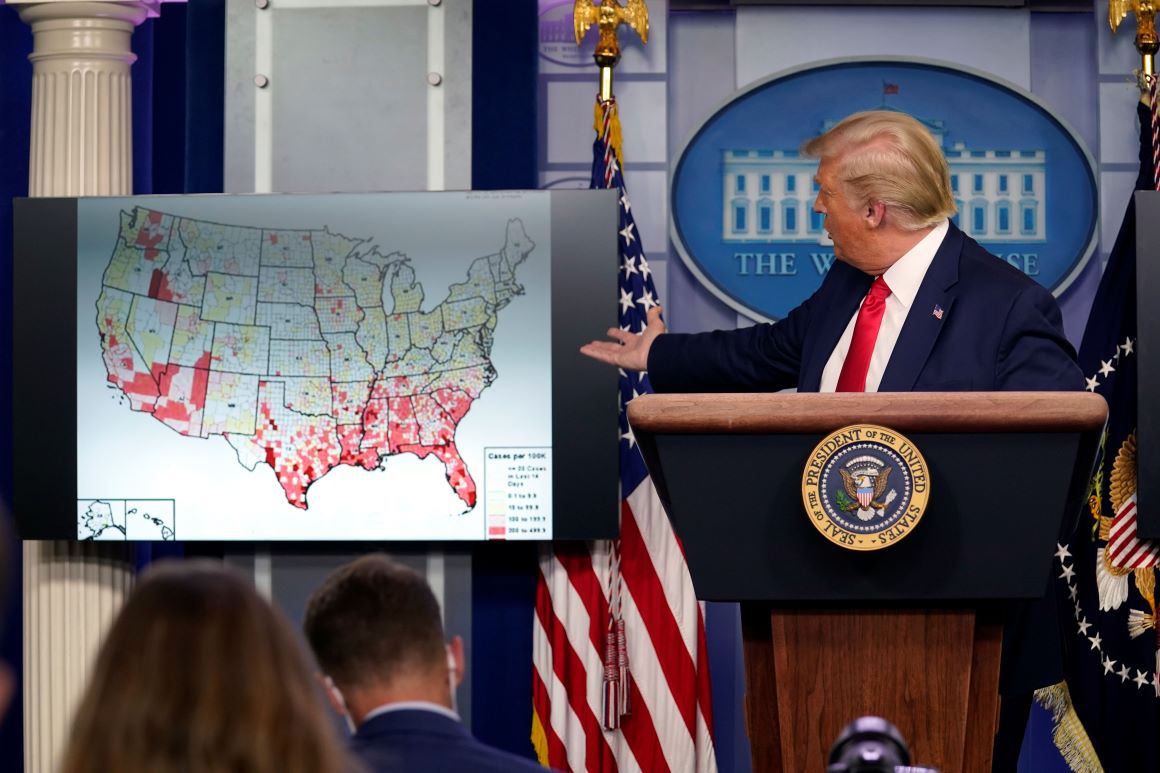 “This is the picture of states that are not doing well at all,” said Marta Wosińska, a deputy director for the Duke-Margolis Center for Health Policy, who helped produce the forecast.

In a reversal, President Donald Trump earlier this week declared that the coronavirus outlook is likely to get worse before it improves. But he later inaccurately suggested that the outbreaks are limited to select areas in the South and Southwest and embraced an optimistic viewpoint during a Wednesday briefing at the White House.

“The light is starting to shine,” Trump said Wednesday, touting his administration’s nearly $ 2 billion deal with Pfizer for 100 million doses of a vaccine candidate that’s under development.

Some like Thomas Lee, a managing partner at Fundstrat Global Advisors, have embraced the rosier view that a four-week surge of Covid-19 cases is ending and that hospitalization and even daily death rates may be trending downward. Lee said this has allowed for a “redo” of from early June, when virus trends were more favorable.

However, the outlook in June was far different from the one facing the country now. The U.S. this month is recording about three times as many daily infections, and nationwide coronavirus hospitalizations are nearing 60,000, matching the peak from April when the disease was concentrated to New York and other urban centers. After the virus’ death toll dropped over the spring, the U.S. this week is again recording more than 1,000 daily deaths.

Morgan Stanley updated its disease models this week and now is projecting the nation will hit at least 6.5 million cases. The firm said virus spread is only contained in five states while 25 states are exhibiting new all-time highs.

HHS testing czar Brett Giroir on Thursday reported signs of optimism, however. He said what he termed the “leading indicator,” the percent of positive Covid-19 tests, started to flatten last week and is now going down across the country.

“We are now seeing the seven-day rolling averages of infections starting to go down,” Giroir said. “When that happens, we would predict that hospitalizations will begin going down in the next week or so. And then mortality going down in the next two to three weeks. That does not mean I’m predicting we’re over. Nobody’s letting up their foot from the gas.”

Indeed, while trends in Arizona, Texas and Florida appear to be turning, other states like Idaho and Alabama are still looking grim.

In all, 22 states are facing an “uncontrollable spread” of the virus, according to the new analysis from the Covid Exit Strategy. Another 15 states are “trending poorly,” facing a worsening picture of new cases, rising death rates and shrinking hospital capacity.

Public health experts say the problem continues to be the lack of a coordinated strategy on testing, tracing and public health messaging that’s fragmenting the response.

Many states still don’t have enough contact tracers who can identify people potentially exposed to the virus and convince them to isolate. Their work is made even more challenging by a long lag in testing in some parts of the country, where it can take a week or more to get results. Without those public health tools in place, it could be difficult for the U.S. to significantly bend the curve.

“Getting test results in a timely manner is essential to a disease control strategy built around rapid isolation and quarantining of contacts,” said Cyrus Shahpar, a former medical epidemiologist for the CDC. “Without timely test results, the strategy would need to change.”

And there are still worrying indicators in some of the hard-hit Sun Belt states. In Arizona, 25 percent of tests are still returning positive — well above the single-digit rates that would indicate an outbreak is under control. While Florida and Arizona have seen hospitalizations drop in recent days, Texas and California have continued to set all-time highs. Deaths attributed to coronavirus, typically a lagging indicator, are still on the rise in all four states.

In Florida, surging cases prompted Republican Gov. Ron DeSantis, a close Trump ally, to urge residents to not get “paralyzed by fear,” while the president on Thursday canceled the Jacksonville portion of the Republican national convention.

Public health experts cautioned against those states lifting stronger social distancing measures too quickly or risk another outbreak. Health experts, including some in the Trump administration, said the states’ rush to reopen this spring helped fuel their summer outbreaks before they reinstated tougher measures. Experts said it will take weeks to safely bring down the curve, undermining Trump’s push to get kids back in schools.

“Arizona, Florida and Texas are going to have a problem for at least the next four to six weeks, if not six to eight weeks if you look at the experience of New York City,” Shahpar said. “It doesn’t make sense to say school will reopen in mid-August when your positivity rate is what it is right now. It’s just not going happen safely.”

New York City began to slowly roll back its Covid-19 lockdown on June 8 and moved into the fourth and final reopening phase this week. But it has taken a cautious approach, at times pushing back planned reopenings of indoor restaurants and other businesses to avoid risking spikes seen in other parts of the country.

Experts were optimistic that Trump’s embrace of mask wearing this week, after months of resistance, could help guard against worse outbreaks. Two more Republican governors issued statewide mask mandates this week after others recently reversed themselves.

“Even though it was late, it was critically important that the president said that masks are an important and patriotic thing,” said Andrew Schwab, director of policy, federal affairs and partnerships at United States of Care.

CORRECTION: A previous version of this report misstated Andrew Schwab’s title. He is director of policy, federal affairs and partnerships at United States of Care.