The strange squid-like cephalopod mollusk has at long last been caught on camera in its natural habitat. The Ram’s Horn squid has until now never been officially observed in the wild.

This has all the more frustrating, as their tiny shells are a common occurrence on beaches around the world.

This appears to be the FIRST observation of Spirula, aka Ram’s Horn squid, alive + in its natural environment

A research team at the Schmidt Ocean Institute sent a remotely-operated subversive vehicle to the depths of Australia’s Great Barrier Reef.

And the resulting hour-long footage live streamed on YouTube eventually caught a tantalising glimpse of the Ram’s Horn squid after approximately 13 minutes.

“What on Earth?” a scientist can be heard exclaiming in the background of the video. 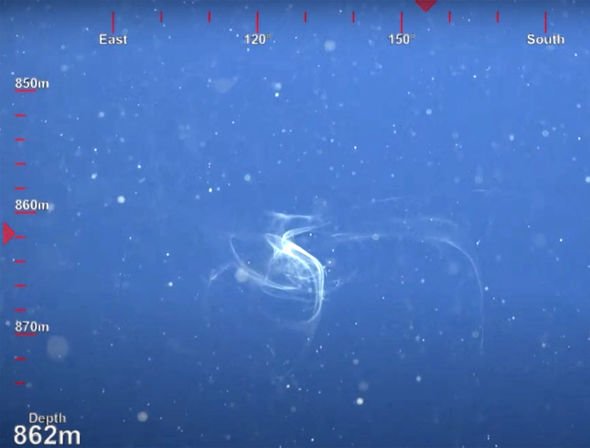 Squid sighting: The squid seemed to leave this ink behind as it dashed away from the camera (Image: Schmidt Ocean Institute)


The oceanographers initially had no idea what they were looking at when the odd-looking three inch-long (7cm) squid first made its long-awaited debut.

Data reveals how the elusive creature was officially found 2,790ft (850m) below the surface, almost at the very limit where sunlight can stretch.

Scientists now know that beneath its cylindrical-shaped outer body is a shell complete with gas chambers allowing the squid to stay buoyant. 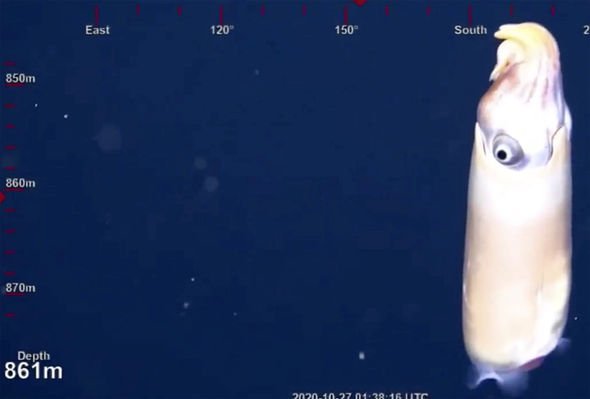 The institute tweeted: “Exciting news! This appears to be the FIRST observation of Spirula, aka Ram’s Horn squid, alive + in its natural environment.

“Very rarely seen or captured, they have many extinct relatives, but are only living member of genus Spirula, family Spirulidae, and order Spirulida.”

Cuttlefish and Ram’s Horn squid are all-the-more fascinating subjects for study as they are the only known creatures to have such an internal chambered shell for buoyancy.

The manner in which such squid orientate themselves is now leading scientists to question everything they thought they knew.

In aquariums, captured squids are often found swimming with their heads hanging down.

However, in the video released this week, the squid is seen to be doing the exact opposite.

Zoologist Michael Vecchione said in a statement: “A lot of people are freaking out because the head is up. 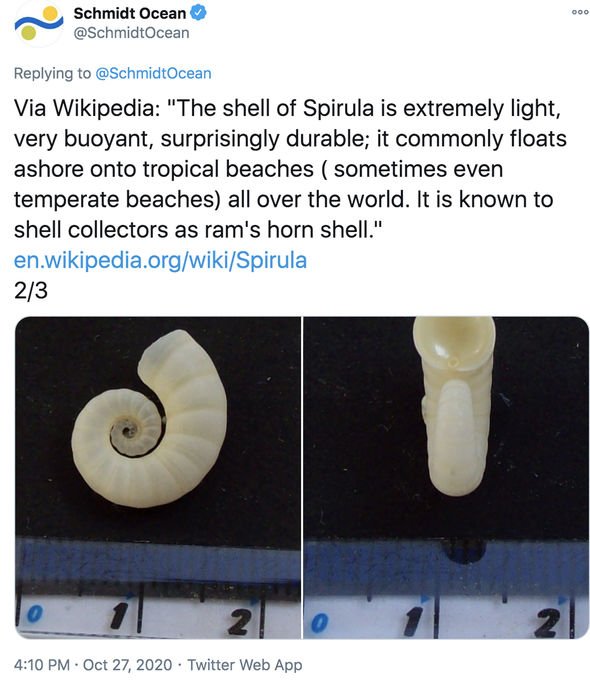 
“And the reason they’re freaking out is because the shell with its buoyancy is at the other end of the squid.

“So you’d think the head, which is heavier, would be hanging down.”

One final mystery remains unsolved about the squids, concerning the ink the squid left trailing behind after it dashed away.

This could be part of their defence mechanism, giving yet more for researchers to ponder.