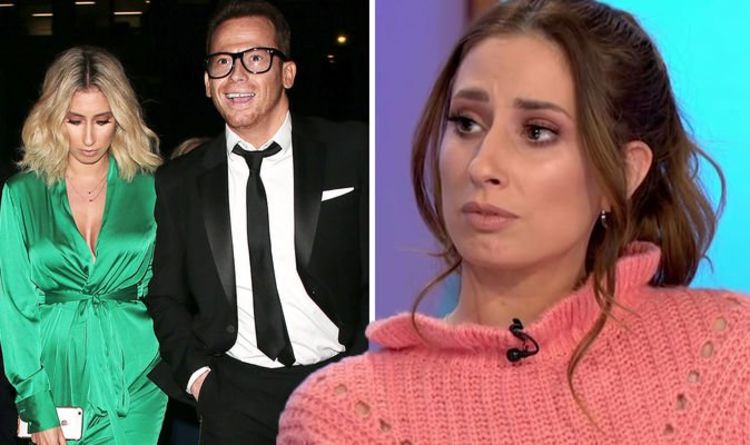 Joe Swash, 38, has revealed that spending time apart from his girlfriend Stacey Solomon, 30, and their young family is “the hardest bit” about competing in Dancing on Ice 2020. The former EastEnders star’s hard work in training has certainly paid off, as he has reached the final of the ITV reality show alongside skating partner Alex Murphy.

In an exclusive interview with Express.co.uk, Joe, who shares his adorable baby son Rex with Stacey, opened up about how the “long hours” he dedicates to rehearsals takes time away from his home life.

He admitted: “That’s really the hardest bit about the whole thing.

“I’ve done seven days a week for the last three months and the show has been going on for so long,  so the commitment has really been difficult with the family, with the new baby and Stacey and stuff.”

He divulged: “A bit like me, she thought it was hilarious, like ‘No way are you going to be able to do this. What are you doing?’

“We genuinely thought I would only be in for three or four weeks and that would be it, so the fact that I’m in the semi-finals, I think everyone is definitely surprised, but happy surprised.

“I put a lot of hard work into it as well, it hasn’t come easy. I’ve put a lot of hours in and I spend most of my time falling over, bruising myself, but I thought it’s a great lesson for my kids as well. Put some hard work in and it will pay off, so it’s been an overall really good experience.”

Detailing the injuries he has sustained from those falls, Joe quipped: “I’ve got a few injuries, where do you want to start?

“My groin, I’ve torn my groin so I’ve got a really bad groin at the moment and my hip flex is gone, I’ve got a cauliflower ear from doing b****y roly polies so my ear looks bad and my shoulder’s sort of like in and out, it’s not great at the moment.”