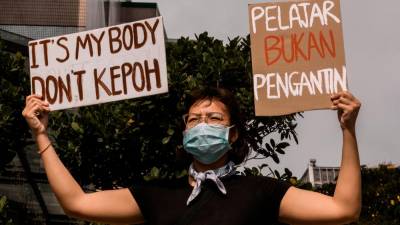 Every day seems to bring another social crisis, but the solidarity at the heart of many collective liberation movements happening across the globe – from #Brexit in Europe, to #BlackLivesMatter in the United States and #MigranJugaManusia in Malaysia – offers a glimmer of light at the end of the tunnel.

Nicole Fong explains: “The very act of being in solidarity with others is the ultimate act of radical love, as it is a way for us to dream and manifest the kind of society and country we want to work towards.”

The 26-year-old data analyst, researcher and activist who works full-time at an education NGO, also divides her attention between grassroots organisations such as Queer Lapis, Klima Action Malaysia and Zero Waste Malaysia.

During her time abroad studying for her undergraduate and postgraduate degree in Economics, Fong experienced the downside of being a minority in a Western country.

“I faced sexual harassment and assault as a woman, and had to navigate racist and xenophobic abuse,” she revealed.

“That led to developing my own awareness of the discrimination that marginalised communities face, along with the systemic and societal factors that contribute and shape this oppression. These experiences made me confront my own privilege, and increased my understanding of oppressed people back home in Malaysia.”

By working directly with marginalised communities, Fong hopes to build a just and equitable Malaysia, where oppressed communities are liberated from systems of oppression and can live with dignity, free from discrimination, abuse, and violence.

She shares: “Community is one of my core values, along with love, justice and equity. I always aim to make my activism as relevant and reflective of the community I’m highlighting, so that it’s always for the community, led by the community.”

Climate justice transcends beyond the physical nature of global warming, it also explores humanity’s collective rights as an ethical and political issue. Who are the most susceptible to the effects of the climate crisis in the country?

“Climate justice is an intersectional movement advocating for the protection of both people and the planet. It acknowledges that the injustices faced by marginalised communities and the planet are interconnected and that we cannot fight for one without the other.

“It amplifies voices of marginalised communities (Orang Asli and Asal communities) who are most affected by it, and puts them at the forefront of the movement. It means moving away from a neoliberal, colonial, extractive way of operating that allows for the economically wealthy to sustain their high consumption levels and shift the ecological burden onto developing countries in the Global South.”

How do you view protest: is the demonstration an expression of political solidarity amongst youths and civil society?

“Young people are the driving force of the climate justice movement, as evidenced by the emergence of a diverse group of young climate activists all around the world leading protests and calling for climate action in their own countries.

“However, young people are still underrepresented in most civic engagement spaces, particularly in political participation.

“The courage of young people during the rallies organised by Klima Action Malaysia last year not only inspired me to work towards fighting for climate justice, but to also hold myself to higher standards of accountability in using my privilege and resources for this movement.

“Having witnessed the success of ‘Parlimen Digital’, I envision a future where we have a movement of young leaders championing for climate justice and calling for swift action through protests.”

Where does solidarity come from?

“Solidarity is grounded in a love ethic where everyone stands together as one and acknowledges the collective humanity in others, regardless of gender identity, sexual orientation, ethnicity, body size, and class.

“To me, solidarity is about embodying this element of ‘I see you, I hear you, and I will stand with you no matter what’. It’s about being critical and speaking out against injustices, even when it’s disruptive to do so. This can look like listening to different perspectives, speaking out on your social media, signing a petition, writing to your MPs, attending a protest, or even as simple as starting a conversation with your friends or family about an issue.”

But oftentimes, solidarity is banned or even silenced by the authorities. Why is it seen as a threat?

“Many of us have been conditioned to believe that we don’t have the right to demand for change and question the laws that govern us as citizens, that our voices and stories mean nothing in a system that will always prioritise the rich and powerful.

“So the very act of being in solidarity breaks this cycle of oppression which by default is meant to make you feel powerless, isolated and divided.

“And this is threatening to those in power who benefit from things staying the same, because suddenly when we’re united, our voices are amplified and they are forced to listen to what we have to say as a collective.”

All the activism on top of your recent dispute with the authorities over LGBT+ rights seems like a lot on your plate. Where does self-care start within yourself?

“It starts by breaking away from what I’ve learnt growing up, such as tying my self-worth to my productivity. And having a narrow view of success strictly defined by achievements and goals has set an extremely high, unrealistic expectations for myself.

“I want to work towards a mindset that treats rest as a form of healing, liberation and resistance, by learning how to set boundaries with my work so that I have time to rest and recover. Self-care also means aligning myself in my locus of control so that I know how I am able to help to the best of my capability.”