Standing up to cyberbullies 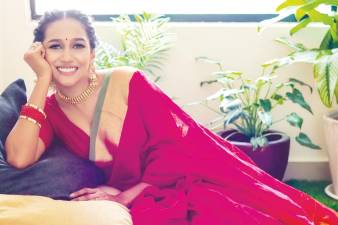 ACTRESS Yasmin Nadiah has acted in Tamil dramas, telemovies, music videos and films, and dreams of becoming a successful entrepreneur and a women empowerment icon. Yasmin also encourages young girls to take up martial arts for self-defence and fitness.

A black belt holder in martial arts, the graceful Yasmin hopes to dispel the misconception that a woman’s body language and behaviour becomes masculine once she begins learning a martial art.

“This is a very wrong stereotype people believe in, and keep believing. I know many beauty queens who are amazing in martial arts. It’s time to drop that mindset,” said Yasmin.

Recently, she experienced cyberbullying. It was a painful moment for her, but the bullies did not shatter her spirit, and like a true martial artist, she fought back and came out the winner from the whole episode.

To deal with her pain, she made a mash-up music video.

“Bullies have always been around. In this era, they just have an extra platform to bully. One good thing is that a victim of cyberbullying now has evidence, as bullies are traceable online. In the same platform, we get to spread awareness on cyberbullying, too.

“Bullies are fundamentally people who are affected mentally, with so much hatred towards something or someone. It could have started from home, where their father bullied their mum, or they could have been victims themselves.

“They just have to vent it somewhere, and when they find someone whom they consider weaker or inferior for various other reasons, they just [unleash] the anger or hatred contained inside them. They definitely need psychological intervention.

“On the other hand, ignorance is bliss for victims. Trust me, the bullies don’t deserve your time and attention. Secondly, blocking is an amazing tool (on social media).”

“A year back, I was called names for getting into a relationship with someone who was at the height of his fame. It was tough to explain that I did not choose the person, but I chose love.

“The comments were nasty. Some messages broke me and my family into pieces. I had sleepless nights, crying myself to sleep for many weeks. The pain was unimaginable.

“It’s easy to believe everything shared on social media, and no one has the time to learn the truth behind it, but they continue sharing for fun.

“I was not given the time or opportunity to explain myself, neither was I in the position to do so. As public figures, we are open to accepting criticism but the line gets blurred when some people cannot differentiate between criticism and personal attacks.

“Do we need a special course to make people understand that artistes are human beings like everyone else, too?”

How did you overcome the situation?

“I had the option to retaliate but I decided it’s better to be silent. Today I realise that was the best decision I made, to ignore negativity.

“Well, it wasn’t easy but I managed to overcome it by surrounding myself with trustworthy and good people. My family members were very [supportive].

“Besides that, I had a very strong circle of friends who took care of me and consoled me when I was not myself.”

What advice would like to give to others who are experiencing a similar situation?

“Surround yourself with good people. It can be anyone you feel will make you comfortable. Don’t let the bullies influence your mind. If it’s on social media, just report the person and don’t act irrationally towards them.

“It’s not worth overthinking it. Focus on your goals, instead. Make yourself extremely busy with work to achieve your goals until you don’t have the time to check on the negative updates. Binge watch some comedy films or series. They make your heart light.”

What inspired you to create the music video?

“Recently, I learned that many people are mentally and physically affected by cyberbullying. Most victims don’t openly talk to overcome the issues. They keep it within themselves. I chose to represent them all. Thanks to the team for being great supporters!

“I hope that people would start taking cyberbullying seriously. It’s not a light issue to be ignored. I had the option and a platform to express myself, but there are thousands of young girls and boys who are still suffering in silence.

“They should know that it is okay to speak out and let people know they are in pain. They will find their problems easing, or find a source of help.”

What changes or actions would you like to see in relation to cyberbullying?

“I would love to see people stop being judgemental, show more empathy, and eradicate cyberbullying. Moral studies should include cyberbullying as a lesson to be discussed in depth.”