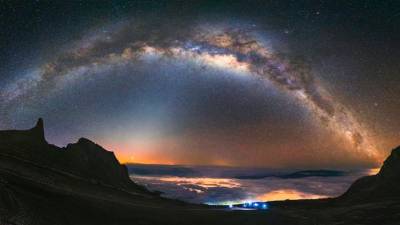 IT ALL started when photographer Grey Chow came across an article stating that 80% of the world’s population has never seen the Milky Way, which shocked him and changed his outlook on life forever.

He explained: “We are losing out on the beautiful night sky due to heavy light pollution. I hope my photos will showcase the beauty of our night sky, and raise awareness for people to appreciate it.

“Apart from the night sky, I also want to share with people the beauty of natural scenery through my lens.”

Chow has climbed mountains and spent sleepless nights on the ground to capture a photograph, and yet he never fails to stop for a moment to revel in the beauty of nature.

He believes that the act of taking great photographs alone is meaningless if the person behind the lens does not appreciate its beauty.

“I love landscape photography, as it allows me to explore different places and look at things that people usually don’t often have the chance to see. I was able to witness the volcanic Mount Bromo in Indonesia under the beautiful sunrise, and the night sky in Northern India.”

“There are so many beautiful wonders out there (to discover),” said the 35-year-old Chow, who specialises in landscape, astrophotography (astronomical objects, celestial events, and the night sky), black and white minimalism, travel and street photography.

For Chow, capturing the beauty of Mount Bromo was one of the memorable moments in his life.

“I, along with my friends, spent two nights atop Bromo without sleep. After dinner on both nights, we went to one of many viewpoints to set up our camera and started taking photos,” said Chow.

“It was freezing and windy, but we were excited because the sky was clear. We saw millions of stars shining above the beautiful volcano. After spending a few hours to capture photographs, we decided to continue to stay until the sun rose the next morning. We were exhausted but felt fulfilled.”

One day in 2016, Chow received a huge number of notifications on his social media account. It was then he realised that his photograph had been featured on BBC News, and went viral.

“Many photos were shown, but the Mount Bromo photo, under the star trails, was the one most liked by many. This provided me with a lot of exposure and a few good sales, and it has profoundly boosted my confidence and reaffirmed my path as a photographer,” he said.

“Each time I plan to shoot – whether to capture a beautiful sunset, Milky Way or even the aurora – I always look for a nice foreground subject.

“This helps to create a more interesting photo with better depth and gives people a better understanding of the place. Every photograph tells a story.

“For example, the photo of a Tibetan monastery in the Himalayan Mountain Range in Northern India tells a story of the 1,000-year-old monastery, and adds a sense of scale, when compared with the size of the Milky Way behind the monastery.”

Chow said a photo of the Milky Way above Mount Kinabalu was the most challenging photo he has ever taken.

“I have had a tougher trip before, but for this shot, I had to hike to the peak. I don’t hike frequently, but I hiked the mount purely to take photographs,” he said.

“I was struggling with my camera gear, which weighed around 10kg. I suffered from altitude sickness, and there were many times I told myself that I wouldn’t make it to the peak. However, the moment I was at the top, seeing billions of stars above me, I felt everything was worth it.”