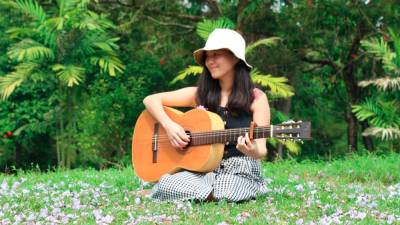 WHEN 26-year-old dental school graduate Sarah Soon is not hiking or out-and-about amongst nature, she occasionally paints.

Beyond that, she is also a musician, and is known for light, breezy tracks like Didn’t Know and The Things That I Miss.

Her side interests vary, and on a surface level, seem to be at odds with her main profession, but perhaps there is a balance there.

In a recent correspondence with theSun, Soon graciously agreed to take some time away from making music to share what she has been up to lately with our readers.

How did you get into music?

“I started making music by chance. I’ve loved music since I was young. I love to sing. However, I used to dislike piano and music lessons when I was a kid, because I did not get why I had to learn them.

“Also, there was no [information about] how to get into the music industry, so it kind of seemed pointless to me.

“The process of learning about classical music was not pleasant, because there was no space for creativity. I eventually learned to love it and started writing songs secretly for myself, but I hadn’t thought about ‘entering the music industry’ until I was brought into a project by my friend’s brother.

“They were aspiring music producers tinkering around trying to create music, and somehow, we managed to create something together.

“Although we were all amateurs at that point, and it wasn’t something too astounding, this gave me the confidence to start writing songs for myself and sing them in public. I learnt [to play] the guitar for convenience’s sake because [a guitar] was easy to bring around. I am mostly self-taught, so there is definitely space for improvement. A lot, in fact.

“I tried learning music production so that I wouldn’t be too dependent on music producers to get my music out there, but it hasn’t been easy.

“I had to juggle between my studies and music back then; dental school was tough, and so was making music. Everything has been slow. [The process of] making music, from composing to production, has a steep learning curve, but I hope I am getting somewhere.”

How would you define your music?

“My music is not complicated. There’s nothing about social issues or any political topics. It’s just how I feel, what I think and what I’ve been through being put in a song.

“Sometimes it can be about the life lessons that I want to remind myself of. I don’t have a specific style, because I can get indecisive, especially when the music landscape nowadays is expanding, so I just start writing and see how it goes, and see what feels right.

“One of my songs ended up having R&B beats and another ended up being folk. I listen to all sorts of music, and I get my inspiration and influences from different genres, so I just make what feels right.

“Also, I think the production style decides what [type of] song it will become, so it really depends on my mood and my skillset at that moment.”

According to Spotify, you’ve released three singles since December of last year, with the most recent coming out this August. Will there be an album in the future?

“[I have released] two singles and one cover. I would be happy if I can have an EP. An album would be too farfetched.

“I don’t think I am that matured of a writer to produce that much good music for now (laughs). I’m doing it all alone and it takes time.

“I’m taking time to practice writing songs. My goal for now is just to regularly upload songs to streaming platforms and to perform more.”

You were recently featured on Drum Asia’s Open Mic livestream. What was the ‘livestream gig during a pandemic’ experience like? As a whole, do you think this format is sustainable until live music is able to return safely?

“I felt extremely grateful for the opportunity to sing for other people, despite the pandemic experience limiting public performances. I think this ‘virtual’ live show is probably the best platform any performer can ask for when public places were made to close.

“But as a performer myself, nothing can beat being out there performing in real life. There is just something special about performing in front of people, which I hope to do more often.

“I think people are resuming their normal lifestyles, and live music is still ultimately more enjoyable than looking at a screen.”