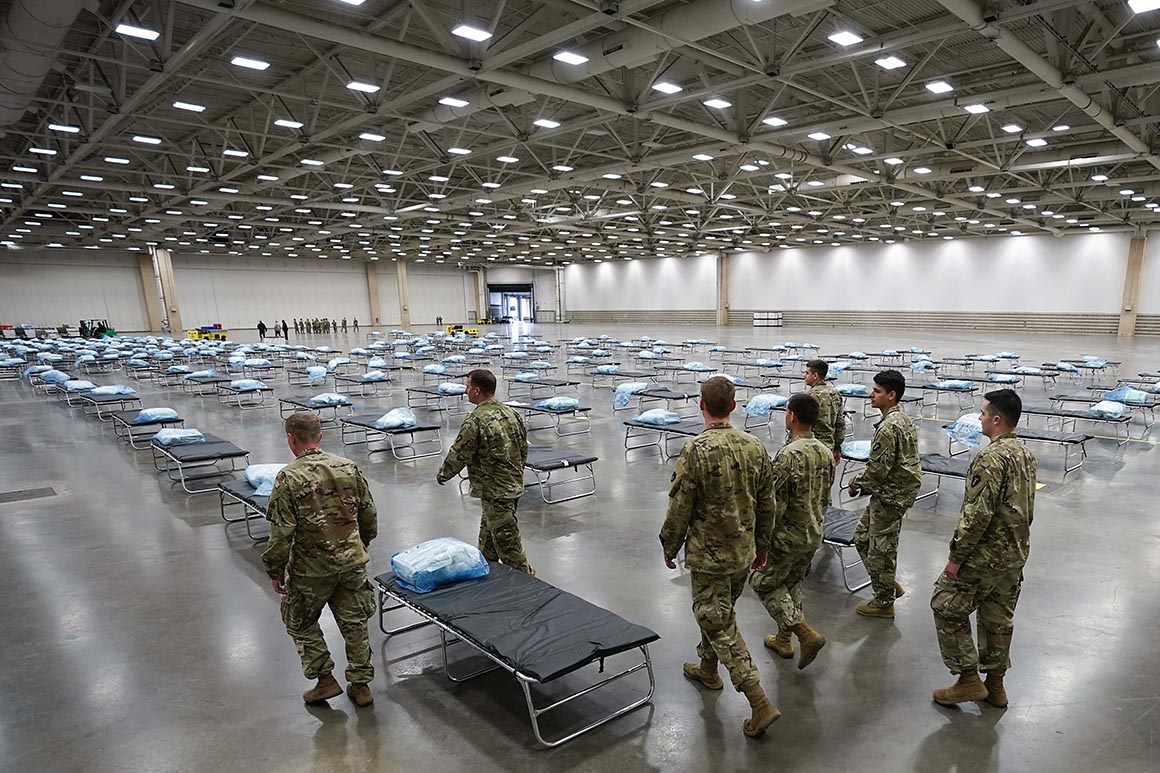 States like Georgia, Texas and Colorado have begun lifting stay-at-home orders without a robust army of public health workers to quickly identify people who’ve come into contact with coronavirus patients, worrying health experts that the states could be at heightened risk for a new wave of infections.

Members of President Donald Trump’s coronavirus task force have warned a reopening risks erasing weeks of progress in slowing the virus if states don’t have an extensive system for identifying patients and tracing their contacts. The number of contact tracers states need depends on factors like infection rates, testing availability and population density. But those moving to relax restrictions have far fewer contact tracers per capita than many of those remaining locked down for at least a few more weeks.

Texas will begin reopening restaurants, stores and movie theaters this week with just 1,100 contact tracers, about a quarter of what Republican Gov. Greg Abbott hopes to eventually have in place.

Georgia Gov. Brian Kemp, whose aggressive reopening was criticized by Trump, wants to deploy 1,000 contact tracers across the state and is looking to interns to help fill the ranks. The state health department, acknowledging the tracking program isn’t fully up to speed, said it’s so far enlisted just 300.

In Florida, where stores and restaurants will begin reopening Monday, the health department has just 500 contact tracers in a state with about 35,000 reported cases. In some of the most populous counties, the number of tracers is in the single digits.

Those efforts stand in stark contrast to other states like Massachusetts and California, which are taking more cautious approaches to reopening. Massachusetts, the first state to announce an ambitious contact tracing operation during the pandemic, hired some 2,000 people last month. California is amassing a force of 10,000 paid and volunteer tracers, building on an already robust disease tracking system across the state. 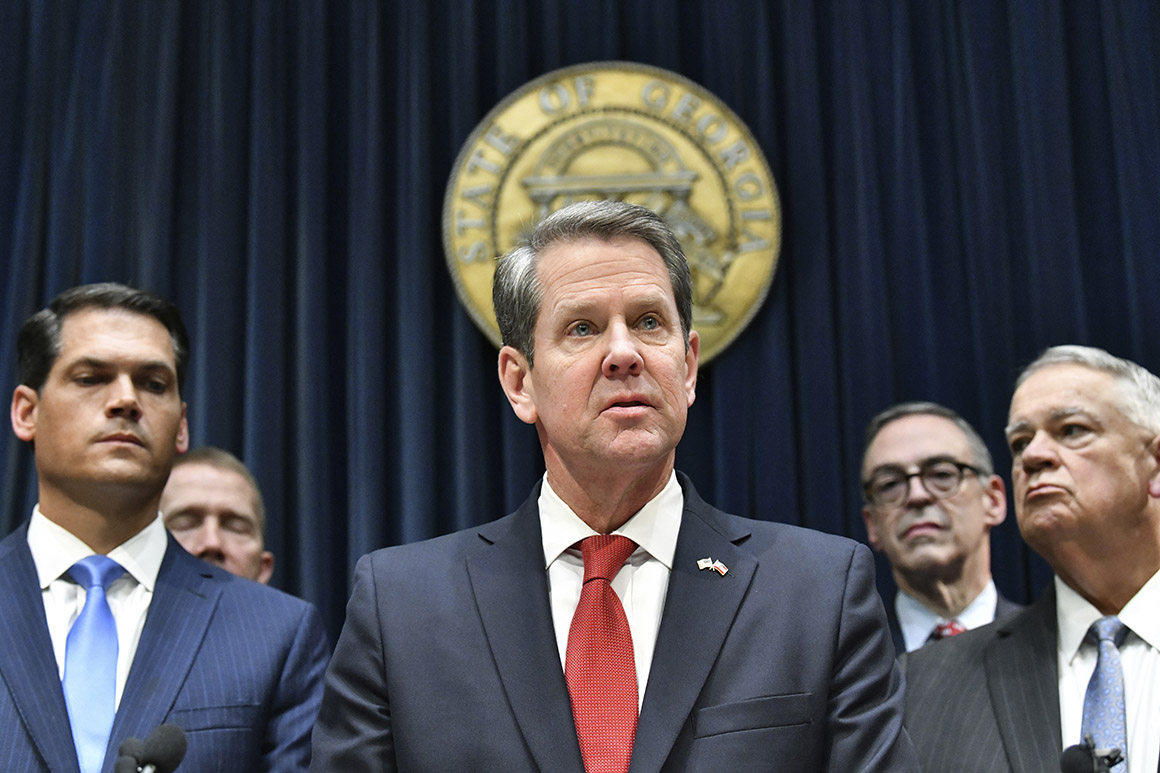 The governors in states with sparser contact tracing programs said dire unemployment numbers have left them little choice but to begin gradually sending people back to work while case counts still grow, even if it means reopening before they can fully bolster public health measures. They say weeks of unprecedented shutdowns have ensured their health care systems won’t be overrun if the number of coronavirus cases creeps upward, and they can move swiftly to reimpose lockdown orders should new hot spots emerge.

“We are looking at depression-level unemployment,” Kemp said earlier this week. “We’re facing hardships now trying to feed everybody.”

But even when these states hit their hiring targets for contact tracers, public health experts said they are still likely to have fewer than needed to prevent a second spike of infections. Thousands of potential new contacts to track are being added every day in these states, and many have inadequate ability to quickly identify new cases through testing. Health experts also warn the job of meticulously tracing contacts gets only more difficult as more people reenter the workforce and go about their daily lives.

“If it’s not done in a methodical, reasonable way, it’ll undo all the strong work we’ve done in the community,” said Dr. Umair Shah, who leads the public health department in Harris County, Texas, an area that includes Houston and is more populous than several states.

Contact tracing programs, paired with expansive testing, have been credited with controlling the spread of Covid-19 in countries like South Korea and New Zealand. Public health experts and lawmakers have called for the U.S. to establish a national program of contact tracers numbering between 100,000 and 300,000 — far more than the nearly 2,000 state and local health departments had before the novel coronavirus emerged.

Public health departments, already suffering from years of funding cuts, face an unprecedented challenge. While their small teams of disease detectives are used to tracking sexually transmitted diseases, which are slow to spread, or viruses like the measles for which there is a vaccine, they’ve never attempted to thwart an easily transmittable virus that’s quickly spread to over 1 million Americans and killed at least 64,000.

Experts, including former FDA Commissioner Scott Gottlieb and Medicare chief Andy Slavitt, this week called for a $ 46 billion national investment to help states trace contacts and isolate people outside of their homes. That plea came even after Congress last week cleared $ 25 billion for testing other public health measures, including contact tracing.

Before Texas imposed its stay-at-home order, contact tracers in Houston on average were speaking to about a dozen contacts of newly infected people, said Kirstin Short, who heads the city health department’s epidemiology office. That number was cut in half under the lockdown measure set to expire this week.

“Social distancing was working,” Short said. “But we’re anticipating that as these restrictions are loosened, those potential contacts are going back up again.”

Polls have shown widespread support for social distancing measures, so many residents in reopening states may still be cautious. Some localities, including Denver and Boulder County, Colo., are breaking with governors to keep their stay-at-home orders in place. And in states where a governor’s reopening orders have wiped away local rules, mayors in Atlanta and Austin, Texas, are pleading with residents to stay home.

The Trump administration has largely shifted responsibility to the states for coronavirus testing, as well as contact tracing, providing little guidance about how many workers states should hire or how they should be deployed. That’s led to a patchwork of state responses, with some building up an army of contact tracers ahead of reopening.

New York Gov. Andrew Cuomo on Thursday announced his hard-hit state will hire as many as 17,000 tracers to track down a virus still infecting thousands by the day.

"That is an overwhelming scale to an operation that has never existed before," Cuomo said.

Elsewhere, some local health officials say there is a large gap between states’ plans for hiring contact tracers and the situation on the ground. In Colorado, where stay-at-home orders were peeled back this week, local health officials estimate at least 1,000 contact tracers are needed, but the state currently has just 56 and has enlisted help from 20 students at the University of Colorado’s School of Public Health. Colorado’s health department said it’s working with public health agencies and others to “identify gaps to inform our planning and hiring moving forward.”

Theresa Anselmo, executive director of the Colorado Association of Local Public Health Officials, said public health departments may ultimately need to hire as many as 5,000 people. In addition to tracing possible new infections, staff also must make sure people can safely isolate.

“We need staff to ensure that people who are asked to quarantine are successful in doing so,” Anselmo said. “We need people making sure they have the food they need, that they have their medications, rent and utility assistance, etc.”

Many states are also exploring the use of apps to help track who has been around an infected person, which could encourage more people to get tested and quarantine on their own. These apps could reduce the workload for contact tracers, but the technology is still under development, and privacy concerns will likely limit how widely the public embraces these apps.

In Georgia, where residents this week returned to restaurants, movie theaters and nail salons, the state is testing an app to help the contacts of infected people monitor and report their symptoms. Health officials hope to roll it out statewide next week.

Ultimately, health experts say contact tracing alone won’t be enough to stamp out Covid-19. The virus is still moving too quickly and an ongoing lag in testing will make it difficult to quickly identify new infections, especially since many people are carriers without showing symptoms.