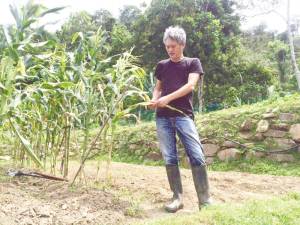 A COMPOSER, director and actor, Pete Teo has worn many hats in the entertainment industry over the years, and still keeps himself busy to this day.

In fact, when we spoke to him by phone, he had just only finished a film shoot in Kemaman, Terengganu before heading to his farm in Janda Baik, Pahang.

Speaking about the movie he was working on, Teo said: “It is a new movie by Tan Chui Mui. It is a co-production with China and Hong Kong. She is acting in and directing it. Bront Palarae is in it, too.”

Referring to what it is like to shoot a film with a pandemic going on, Teo said that they have to follow strict Standard Operation Procedure (SOP) in terms of social distancing, washing their hands and sanitising everything.

“It is a bit more work. You constantly have to fight the urge to do what you did before.”

He pointed that on film shoots people invariably come into close contact, such as the person who has to apply makeup. “Now they have to wear masks or face shields, so that everyone will be safe.”

He says the actors take off their masks during a scene and put them back on afterwards.

As a director himself, he resists the temptation of “offering his suggestions.”

“I think as an actor you have to obey the first rule: that you are hired as an actor, and that is where you stay. I personally work with directors whose vision and craft I like. So you respect the vision, you respect the craft, and I don’t find that a problem.

“As an actor, you just help them realise their vision. It is not such a difficult thing really. It is just centred out of respect for another person’s vision and voice.”

We, of course, were also curious about his farm.

“It started about six years ago. When my wife Lisa and I got the chance to take over the running of an organic farm, we both felt it was a good time for a change. At that time we felt we were both sick of the city.

“We had been living in cities for most of our lives. We thought we should do something different for the last third of our lives.”

Teo said it was a case of having ‘done what you wanted to do’ and finding it had lost its shine.

His wife always loved cooking, and with the farm she could start a farm-to-table restaurant, where she could express herself with her cooking.

“For me, most of my work has been in the creative field, either music or film, in all sorts of capacity. Being on the farm is more grounded.

“There is a lot of bullsh*t in the entertainment industry. In agriculture, it is very straightforward, it is very honest. You can’t really bullsh*t a tomato plant.”

The local film industry has been enjoying a major upswing in recent years, with movies generating huge box office returns, some on par with major Hollywood films that have opened here.

Teo is confident that the industry will recover.

“The people who are making the movies are still around, and the people who are consuming the local movies will still be around. The interest and skill set is still there. The big question is, when is it safe for people to go back into the theatres, and that might take nine to 12 months from now.

Teo acknowledges that people in the industry are going through tough times, especially those who work as freelancers with no safety net.

“I don’t think the industry will collapse because of it. People have to basically pull through it. But these are not the hardest times we have ever faced [as an industry].”

When asked about his views on the current political climate, Teo said: “I will be lying if I said it hasn’t been disappointing, especially these last 12 months.

“But it is still our country, and as long as the people still believe they own it, and feel they can contribute to it as citizens or as voters, they will continue to participate in the political process.

“It is important that they do so.”