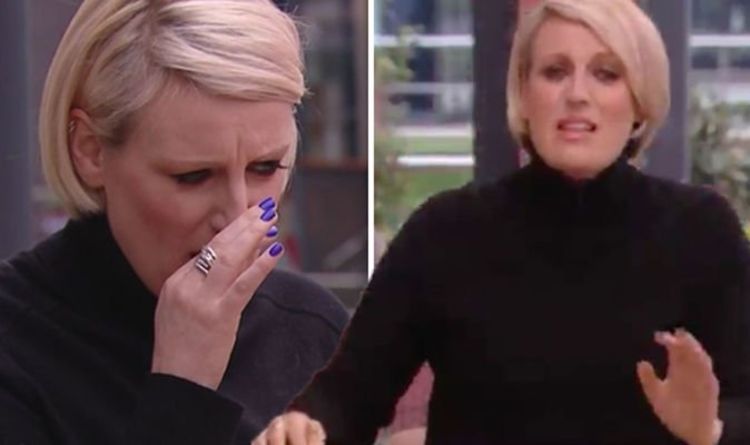 Steph, 38, was on hand to host another edition of Steph’s Packed Lunch on Channel 4 and she was joined in the studio by sports pundit Chris Kamara, 62, and comedian Russell Kane, 44. It was when the former professional footballer began to talk about his experiences of racism when he was growing up the presenter began to tear up. As the former BBC journalist broke down crying the programme had to be cut short as the mother-of-one was unable to carry on with her duties.

How is Boris Johnson handling the coronavirus crisis? Vote in our poll

Discussing the topical matter, Chris explained what racial abuse he experienced in Middlesbrough as a young black man.

“When I first started playing football, ‘Love Thy Neighbour’ and ‘Alf Garnett’ were the programmes on the telly,” he began.

“I would go into training the next day – and I like a laugh – so I would have a laugh about these programmes the same as anyone else.

“But when you weren’t in the changing rooms, they should stop talking, the players, and then they’d go, ‘Oh you don’t mind, Kammy’.

“And I couldn’t mind because I was the minority – I was one person. If you had two or three of you, you’d say, ‘You know, it’s fine and it’s a giggle but really and truly it hurts,’ he continued before recalling some of his other memories.

Having grown up in the north herself, Steph was overcome with emotion when she heard about her co-star’s ordeal.

A third posted on the social media platform: “Well said Kammy,” with a fourth commenting: “We love you Kammy #NationalTreasure.”

“What a great, natural response to such an important subject. hearing people’s real-life experiences of racism is just what we need to see, particularly during black history month,” a fifth opined.

With Thursday, October 1, 2020, marking the beginning of Black History Month, all television networks will be showcasing the best of black talent.

It was announced earlier this year Channel 4 bosses had made five commissions of special programming to celebrate the pivotal occasion.

By James Hunt @screenrantBaby Yoda is back to doing what he does best in The Mandalorian season 2, episode 4, “Chapter 12: The Siege” -...
Read more