Stomach bloating: Can’t get rid of the bloat? It may this signal this serious condition 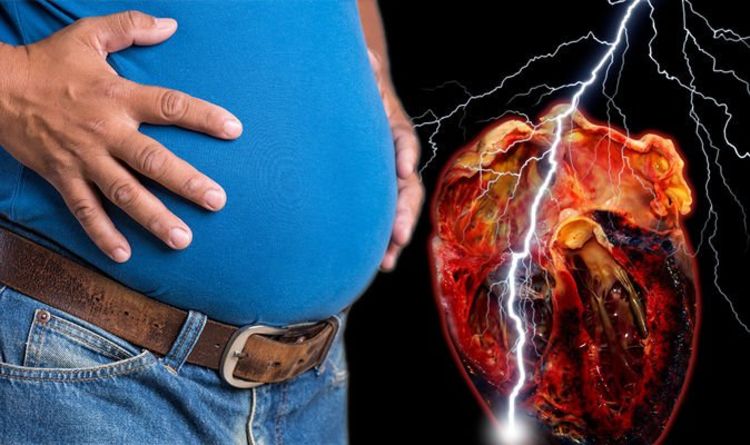 As the AHA explains, the kidneys are less able to dispose of sodium and water, also causing fluid retention in the tissues.

A telltale sign your bloating is a result of heart failure is swelling in other regions too.

According to the AHA, heart failure can cause swelling in the feet, ankles, legs.

“See your GP if you experience persistent or gradually worsening symptoms of heart failure,” advises the NHS.

As the health body points out, the symptoms can be caused by other, less serious conditions, so it’s a good idea to get them checked out.

What else could be causing your bloat?

According to Harvard Health, other underlying triggers of bloating include:

According to Dr. Kyle Staller, a gastroenterologist at Harvard-affiliated Massachusetts General Hospital, “sudden bloating” can spell something serious is up.

He explained: “Most people who have bloating start experiencing it at a young age.

“But if someone is suddenly having bloating in older age, that’s sometimes a red flag that tells me something has changed and needs to be investigated.”

What causes sudden bloating? The symptom could be an inflammatory bowel condition, constipation, lactose intolerance, celiac disease, or (in rare cases) cancer.

According to Harvard Health, if sudden bloating lasts more than a few days, report the symptom to your doctor or gastroenterologist.

If you have been feeling bloated for more than 12 times a month, you should also see your GP.

As the NHS warns, persistent bloating of this nature is a main symptom of ovarian cancer.

Other supermarket giants have also said that panic buying is not needed and creates a tension in the supply chain which leave result in...
Read more
Lifestyle

[Pangyo, the Silicon Valley in Asia] Exosystems, a Healthcare Device Company for Rehabilitation of Patients with Musculoskeletal Diseases

ExoRehab helps the elderly and people with sarcopenia to use their muscles without relying on expensive medical devices.    LOS ANGELES, CA, September 24, 2020 /24-7PressRelease/...
Read more
Lifestyle

How To Help Someone Addicted To Alcohol Or Drugs – New Book By Linville Meadows MD Reveals Why Physicians Experience Much Higher Addiction Recovery...

WILMINGTON, NC, September 24, 2020 /24-7PressRelease/ -- According to the 2019 National Survey on Drug Use and Health by the Substance Abuse and Mental...
Read more
Lifestyle

Having too much sugar in the blood for long periods of time can cause serious health problems if it's not treated. Hyperglycaemia can damage...
Read more
Lifestyle