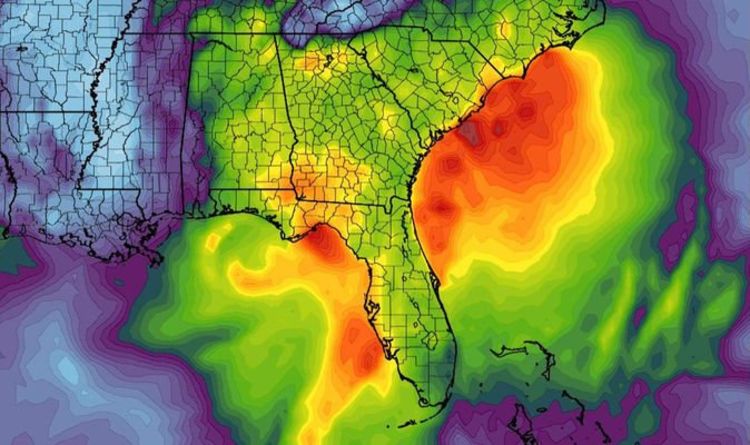 Storm Nestor will batter Florida ’s Gulf Coast in the US this afternoon, as the post-tropical cyclone makes landfall in the Sunshine State. Nestor began churning in the Gulf of Mexico last week as a tropical disturbance and strengthened to a tropical storm over Friday. Now the storm has downgraded but is still expected to pack a punch as it drags across the southeast US.

The latest update from the National Oceanic and Atmospheric Administration (NOAA) states the storm will move inland over Florida this afternoon.

Nestor is expected to stay inland until Sunday when it will move off the coast of North Carolina.

“The post-tropical cyclone is accelerating toward the east-northeast near 23 mph (37 km/h), and this motion is expected to continue this afternoon, followed by a motion toward the northeast by tonight and early Sunday.”

“On the forecast track, Post-Tropical Cyclone Nestor will move farther inland over the Florida Panhandle this afternoon, and will then move across portions of the southeastern United States later tonight and Sunday.

“The cyclone is expected to move offshore of the coast of North Carolina into the western Atlantic by late Sunday.”

“Doppler radar data and surface observations indicate that maximum sustained winds have decreased to near 45 mph (75 km/h) with higher gusts.”

“Some additional slight weakening is expected now that Nestor has moved inland.”

The NOAA also expects rainfall accumulation of two to four inches in Florida, with isolated maximum amounts of eight inches.

They also precept tornadoes are possible this afternoon over east-central Florida, and during the night and evening over Georgia and the Carolina coasts.

ByFirst lady Melania Trump appeared to express astonishment over Vogue magazine's decision to feature Beyoncé on the cover of its September 2018 issue and...
Read more