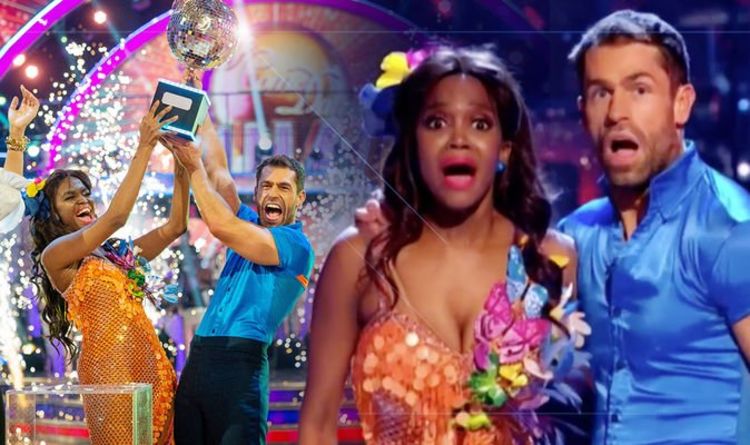 Kelvin and Oti were up against EastEnders star Emma Barton and her partner Anton Du Beke and CBBC presenter Karim Zeroual and his pro-dancer Amy Dowden. They each performed three of their best dances in the hopes of impressing the viewer enough to vote them the winners of this year’s competition. But it seems it wasn’t enough to keep the die-hard Strictly Come Dancing fans interested as their viewing figures took a dip compared to last year.

The 2018 final saw 11.7 million people tuning in to watch the marathon two hour long show, with a peak audience of 12.7 million.

Stacey and her now boyfriend Kevin beat off all the competition and were crowned the winners.

However, it seems this year viewers aren’t as interested as the amount of people watching last night took a dip.

Last night saw Emma and Anton dance the Charleston  to Thoroughly Modern Millie, their showdance to Let Yourself Go and their favourite dance which was the Viennese Waltz  to Send In The Clowns.

Karim and Any danced the quickstep to Mr. Pinstripe Suit, their showdance to A Million Dreams from The Greatest Showman and their favourite dance, which was the Jive to You Can’t Stop The Beat.

The winners, Kelvin and Oti, danced their judges’ pick, which was the Rumba to Ain’t No Sunshine, their showdance to Shout and their favourite dance, which was the Samba to La Vida Es Un Carnaval.

Kelvin was odds on to win with Emma and Anton second and Karim coming in third.