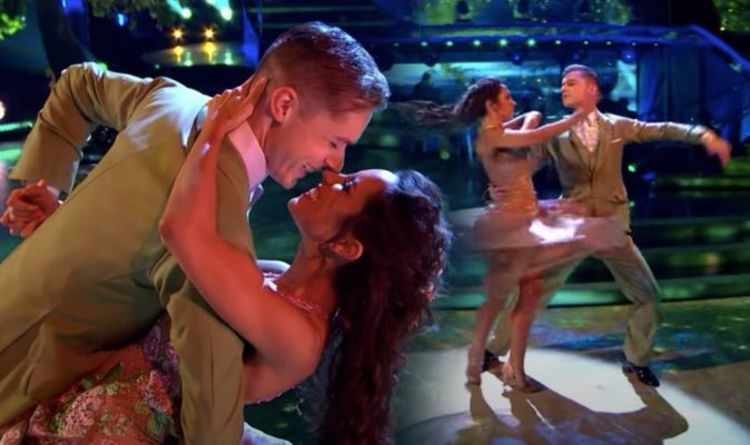 Judi James spoke exclusively to Express.co.uk and said: “The couple with the best chemistry is the couple that maybe looked the oddest when they were paired up.”

She went on: “HRVY has gone from being a rather cocky-looking young guy to a superb, romantic dancer and it was clear from the glimpses of their rehearsals that Janette is the perfect partner in terms of bringing all that talent out.”

It seems the professional is a strict teacher with her partner.

“It’s tough love during rehearsals, with Janette literally using a wagging, pointing finger as a warning gesture to ensure his focus and commitment as she tore into every detail of his dance,” Judi said.

However: “On the floor it’s pure romance to the point where the pair paused head-to-head at the end for a dramatic, pre-kiss second before laughing and rubbing noses instead.

“After their routine Janette converts to ‘proud mum’ mode, clutching his arm and rubbing and stroking him in reward gestures.

“HRVY did the first ‘nan tears’ of the series but I’m sure there will be an ocean of sobbing to come from the other celebs over the next few weeks.”

While Hrvy and his partner Janette have the best chemistry on the dance floor, according to the expert, it seems the singer and actress Maisie Smith are developing a fond friendship.

“They’re both young, single and hot and the thought is that the two of them could bring the other cast into risk if they break the guidelines and get closer.”

BBC Breakfast presenter Chris Hollins and his professional partner Ola Jordan surprised viewers when they beat Ricky Whittle and his partner Natalie Lowe in the final. They wowed with the Foxtrot, Charleston, Lindy Hop and Showdance.

Late to the Strictly Come Dancing party, Kelvin signed up after Jamie Laing was forced to pull out with an injury. But that didn’t stop the Emmerdale actor from dancing up a storm with professional partner Oti Mabuse.