Smoke from wildfires has been covering San Francisco for weeks, but the layer that blew in on Wednesday morning was much thicker.

And as the day wore on, the sky took on a darker hue of orange, making life in the city at 11 am feel like night time, with streetlights and car headlights beaming through the dark and eerie shadows stretching across the ground.

The all-day eclipse is due to a series of Northern California wildfires that broke out in late August following a cluster of lightning storms and subsequent power outages.

One of the wildfires, the SCU Lightning Complex, is currently 95 percent contained and has become one of the largest in California’s history.

Firefighters continue to battle the blazes that have swept through this part of the state, including the fires that have begun more recently, like the fast-growing Creek Fire that has consumed over 160,000 acres so far.

The smoke in San Francisco on Wednesday sat above the fog, so air quality was not significantly worse despite a surreal sky that looked like something out of an Edvard Munch painting.

Here’s how the city looked in the eerie, apocalyptic-looking haze. 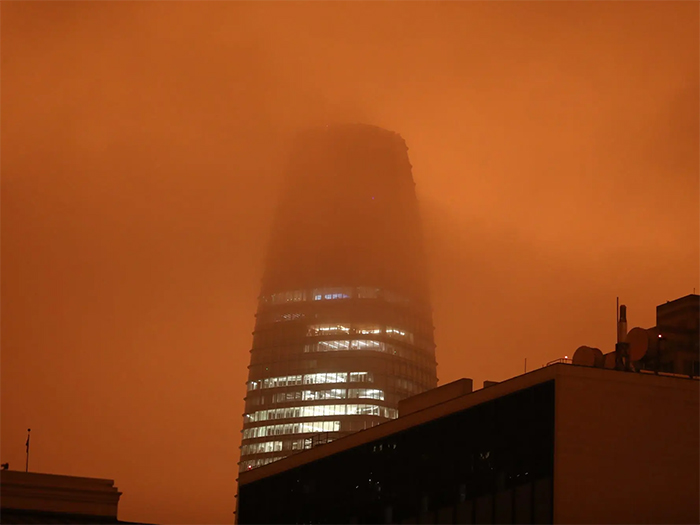 The Salesforce Tower in San Francisco at 10:30 am on 9 Sept 2020. (Katie Canales/Business Insider)

A series of wildfires broke out near the San Francisco Bay Area in August.

Storms and a heatwave resulted in power outages and lightning strikes that sparked clusters of fires around the region.

Smoke from the wildfires has been infiltrating the city for weeks already, with officials advising residents to remain indoors when the air quality is poor, and more fires have erupted within the past week.

But Wednesday was a bit different – this time the smoke blew in and sat atop the city’s infamous fog, with the marine layer blocking the smoke from reaching the ground level.

The eerie orange colour is because of a phenomenon known as Mie scattering. It results in the sky turning orange or red when wildfire smoke permeates the air. That’s because smoke particles – like dust and soot – block sunlight from reaching the ground. 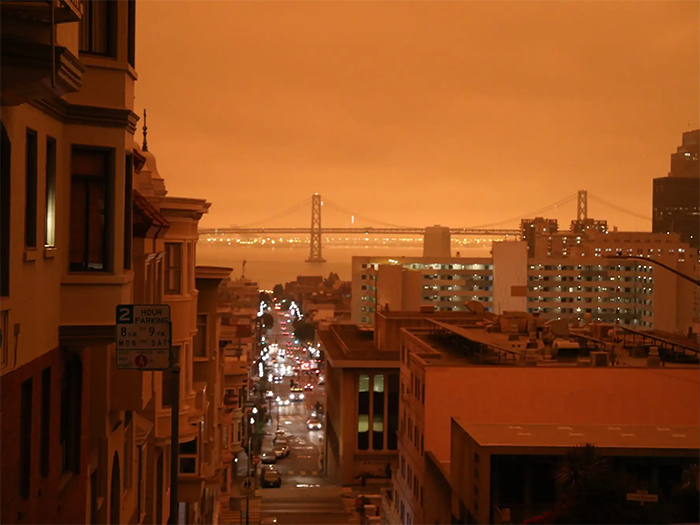 For that reason, Wednesday morning’s air quality was actually not as poor as usual, nor was the smell of the smoke as powerful as it typically is – at least for now.

But it meant that at around 11 am on Wednesday, the city looked as though it were nighttime.

San Francisco is one of many cities that is currently grappling with the effects of the fires that are burning in California as well as in other locales along the West Coast.

Smoke from the fires will likely continue to fill the air in the San Francisco Bay Area. 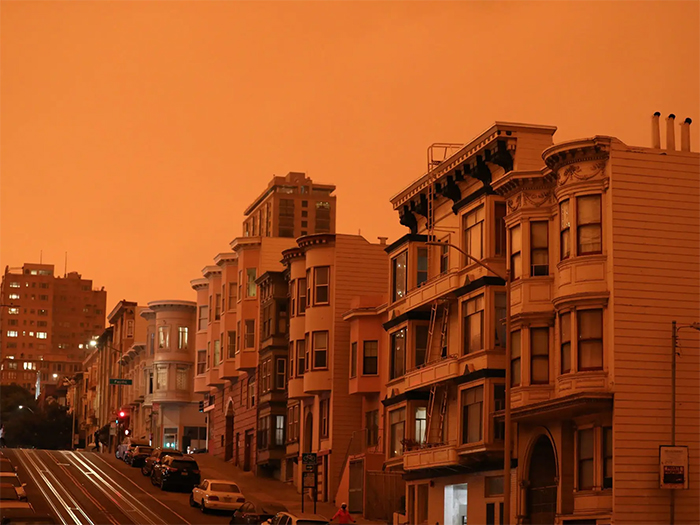 However, as UCLA scientist Daniel Swain wrote on Twitter on Wednesday, “It won’t be this bad all the time, but the scope of the fires is just that extreme.”

Oliver Milman This story originally appeared on The Guardian and is part of the Climate Desk collaboration. The cars that typically throng the huge highways weaving...
Read more
Science

MATTHEW CIMONE, Universe Today Jupiter. Most massive planet in the solar system – twice that of all the other planets combined. This giant world formed from...
Read more
Science

The longer text, or at least the surviving fragments of it, describe Balaam's vision of divine destruction by the gods. Professor Meyer believes the pagan...
Read more
Science