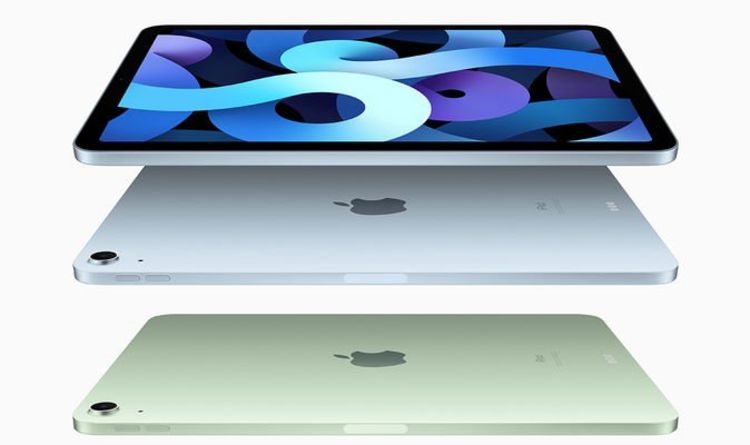 Apple’s September launch event has just taken place via an online live stream and one of the biggest announcements of the night is an all-new iPad Air. This fully refreshed tablet had been rumoured for a while and it seems many of the leaked features have turned out to be true.

Perhaps the biggest upgrade to this hugely popular device is a totally refreshed design which makes it look far more like the premium iPad Pro.

That means users will get a tablet with a 10.9-inch Liquid Retina display that pushes closer to the edge of the device plus there’s no sign of the chunky chin or forehead which has graced the older model since it first launched.

Without those bezels, Apple has now placed the Touch ID fingerprint scanner on the top of the Air, as part of the power button, which should make unlocking the screen just as easy as before.

If it’s power you are after then you won’t have any issues with the US firm tucking its all new and blisteringly quick A14 processor under the glass and aluminium shell.

That makes it 40 percent faster than before and there’s also a 30 percent boost to graphics performance.

You’ll also get stereo speakers which will make content sound as good as it looks on that stunning edge-to-edge screen.

Another added bonus of the new Air is that you can now use the latest Apple Pencil to scribble on the screen.

That’s good for two reasons as this stylus is more precise and it can also be charged wirelessly by placing it on the side of the tablet.

The new Magic Keyboard is also compatible which will transform this tablet into a mini laptop and the Lightning port has gone in favour of faster USB-C.

Apple is launching this device in a number of fruity colours including silver, space gray, rose gold, green, and sky blue with prices starting from £579.

“With its gorgeous new all-screen design, larger 10.9-inch Liquid Retina display, next-generation Touch ID, and a massive boost in performance with A14 Bionic, the new iPad Air brings customers powerful pro features at an even more affordable price. Along with major upgrades to the iPad Pro and eighth-generation iPad this year, and the powerful new features of iPadOS 14, this is our strongest iPad lineup ever, giving our customers even more ways to enrich their daily lives.”

Along with all-new iPad Air, there’s also an update to the entry-level iPad.

This device might look the same but it gets the A12 Bionic processor which makes it around 40 percent faster than the previous model.

“We’re excited to offer customers an even faster and more powerful experience with the eighth-generation iPad,” added Joswiak.

“With its beautiful 10.2-inch Retina display, the performance boost from the A12 Bionic, great cameras, and so much more, the new iPad is an incredible value at a time when, more than ever, our customers need powerful and versatile ways to work, play, learn, and connect with loved ones.”

iPad will be available beginning Friday, September 18, with a starting price of £329

The Duchess joined the children at the Club and Beaver Scouts to toast marshmallows around a fire pit. Kate partook in all the activities including...
Read more
Lifestyle

One Woman's Journey From New York Bond Trader to Orthodontist

In Boston, a Developer Is Turning His Childhood Home Into $1 Million Condos

Frank Gehry Now Begins Every Day With a Swim: 'I'm Only 91'

The sneaker boutique Union gave free pairs of their latest collaboration with Nike to the staff of Earle’s On Crenshaw, a Black-owned eatery in...
Read more

Some More On Trenbolone Profile And Effects

Trenbolone Profile And EffectsThe world of steroids keeps evolving as more and more drugs are developed to suit the needs of various people. You...
Read more

Roll (dice) out.They've only gone and made an XCOM-style Transformers game. Transformers: Battlegrounds, due out on 23rd October on PC, PlayStation 4, Xbox One and Nintendo...
Read more