Sturgeon FUMING as she's savaged for IndyRef2 obsession amid SNP-led... 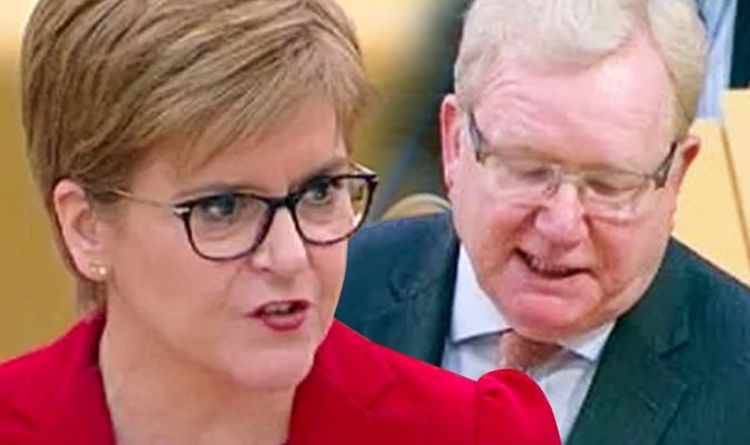 Nicola Sturgeon was drowned out by cheering Conservatives as Jackson Carlaw listed the failings of the SNP Government after explaining it has received an increased budget from Westminster. Mr Carlaw noted leaking police stations, half-built ferries, a crisis in schools and closed off hospitals are some of the many issues Ms Sturgeon should address. But the SNP leader hit back as she said £1.5million has been taken from the Scottish Government in the past 10 years.

Speaking in Scottish Parliament, Mr Carlaw said: “The budget this SNP Government receives from Westminster is on the rise and what do we have to show for it.

“Years of missed opportunity from a distracted and disengaged Government because next week we’re promised yet more updates on her favourite topic.

“First Minister, what chance is there of updating us instead on when your Government is going to start sorting out the things that really matter which are failing under this SNP administration?”

Ms Sturgeon responded: “Let me just update Jackson Carlaw again on the reality in Scotland as opposed to what he wants people to think.

“£1.5million were removed from this Government’s budget by the Conservatives over the past 10 years but in spite of that, we have continued to invest in our NHS taking it to record levels of funding.

“We’ve continued to support our public service workers, working so hard across the country.

“But let me just bring to the attention of Jackson Carlaw what the institute thinks of his proposals he put forward in just the last couple of weeks.”