Sturgeon long-shot: Why EU could be FORCED to accept Scotland – ‘World would LAUGH!’ 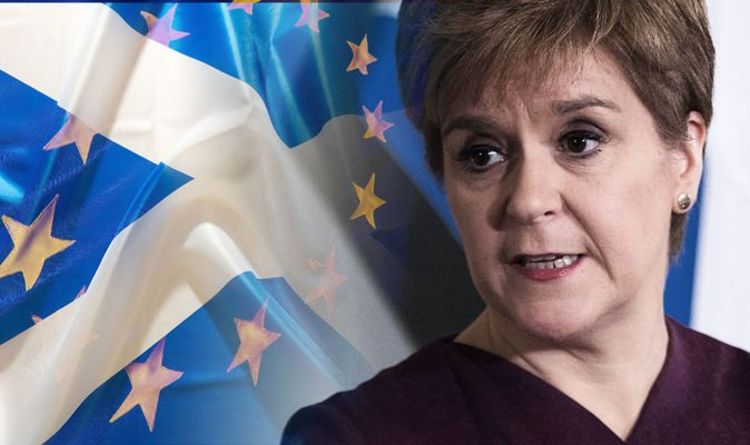 SNP leader and First Minister Ms Sturgeon has renewed her calls for Scotland to be independent within the European Union over the recent months, requesting a second independence referendum to be called in light of the SNP’s performance in the general election.  Earlier this month the party took 48 out of a possible 59 seats north of the border, increasing their dominance in Scotland by 11 seats compared to 2017. She has argued the first referendum in 2014 was held on the assumption Scotland would remain in the EU, and Brexit has therefore altered the union, necessitating another vote.

Ms Sturgeon has also taken her successful performance in the election last month as a mandate for indyref2 – yet, Boris Johnson has insisted he will not grant her a second “once in a generation” vote only a handful of years after the last.

Critics have also pointed out some of the flaws in Ms Sturgeon’s plan to leave the UK and join the EU as an independent state, such as former Scottish National Party deputy-turned-Brexiteer Jim Sillars.

Mr Sillars was the SNP’s deputy between 1991 and 1992, and the architect behind the slogan of ‘Independence in Europe’ which has driven the party ever since.

However, he has become a dissident voice within the party and prominent Brexiteer.

On several occasions, he has pointed out it is unlikely Scotland would be granted entry into the EU, partly because it would “set a precedent of secession”, posing a problem for Spain who are currently fighting separatist calls in Catalonia, and a nation needs unanimous support from all member states to enter the bloc.

Scotland also has a large deficit so the bloc may be reluctant to take it on. If it does accept Scotland, it may force the nation to accept a severe austerity programme.

Yet, Mr Sillars conceded the bloc has an obligation to accept the country too.

Writing in his 2015 book, ‘In Place of Failure: Making it Yes Next Time…soon’, Mr Sillars explained the “difficulty” which might influence the bloc’s decision to accept the country.

He wrote: “A resolute ‘No’ to Scotland remaining within the EU [post-Brexit] as a member state is not without difficulty for the EU as an international institution, whose claim to fame is its democracy.

“Not only does the EU claim to uphold democracy at home, but it spends a great deal of money promoting it abroad, where it preaches change is always possible so long as it is one through non-violence, a fair election, conducted via a regulated campaign, legal rules, open debate, genuine engagement of the voters, and an honest count.

“Would that not be regarded internationally as hypocritical claptrap were it to refuse to recognise and accept a democratic vote in Scotland to change its constitutional relationship writhe the UK and other EU members?

“How could it possibly expel five million of its citizens which Scots are by reason of the Lisbon Treaty, for doing what it preaches others to do?”

The Lisbon Treaty was the international agreement which came into effect in 2009. Eurosceptics believe the treaty is one of the key problems with the bloc, because it consolidated power and, some argue, turned the bloc into a so-called superstate.

Mr Sillars continued: “Do not do to your own, what you tell others to do.

“Not exactly the message Brussels would like the world to hear and laugh at.”

Still, Mr Sillars believes the SNP should not be pushing to join the EU at all.

He told the National in May 2016 and said it undermines the party: “Isn’t it a contradiction to want to be independent of England in a country of 60 million people where we have nine percent representation in a sovereign parliament, to then want to be part of a larger union of 28 member states where our vote in the European Parliament is one percent and we would have very little influence?”